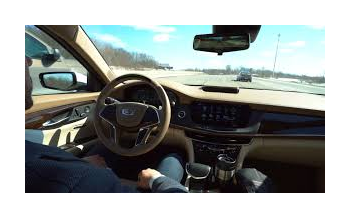 This demonstration of the automaker’s “hands free” semi-autonomous tech which competes with Tesla’s Autopilot marks five years of development of the system.

“We are proud to work hand-in-hand with government officials to continue to develop new technologies that will define the future of transportation in the U.S. It’s especially fitting to kick off this drive in New York City, the home of Cadillac’s new global headquarters, and we’re honored to have the support of New York Governor Andrew Cuomo and Lieutenant Governor Kathy Hochul, both of whom foster New York’s leadership in innovation and cutting-edge technology.” said Johan De Nysschen, General Motors executive vice president and Cadillac president.

A recent video (below) explains how Super Cruise technology works. Once passing into a highway pane, a Super Cruise icon flashes on the dashboard, indicating the driver to press a Super Cruise-dedicated button. A flashing green strip across the top of the steering wheel ‘activates’ the mode and cues the driver to remove his/her hands. Passing cars and shifting to another lane requires the driver to take control before Super Cruise reactivates again on its own.

According to Cadillac, Super Cruise will enable the Cadillac CT6 to navigate 130,000 miles of limited access freeways. It sports two key features: precision LiDAR map data and a driver attention system. Its updated LiDar sensors and GPS capabilities allow the CT6 to track the exact lane used on the highway and charts the trajectory of your vehicle up to 25 meters ahead. Its driver attention system includes head tracking software to keep eyes on the road, along with seat alerts to keep drivers focused.

The technology will debut in the 2018 Cadillac CT6 and go on sale this Fall.

Read the article at hybridCARS.