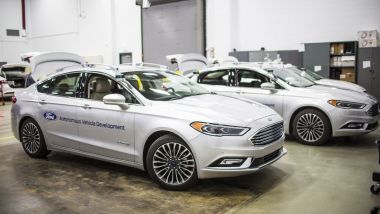 Ford Motor Co. and Lyft — which is partially owned by General Motors Co. — have formed a new partnership to work together on self-driving vehicles the companies announced today, further blurring the lines of autonomous vehicle ownership between OEMs.

The partnership involves a deployment of human-driven vehicles from Ford on Lyft’s network for testing, followed later by connecting those self-driving vehicles to Lyft’s network for public use, Sherif Marakby, Ford’s vice president of autonomous vehicles and electrification, said in a press release.

But this new relationship signals what the evolving mobility ecosystem looks like, in which entangled alliances muddle the OEM ownership of self-driving vehicles.

GM invested $500 million in Lyft in January 2016, taking up a 9% ownership of the rideshare, and has since made its footprint in the company by offering Maven vehicles in Lyft’s Express Drive program. GM also plans to deploy thousands of self-driving electric cars in test fleets beginning in 2018, according to a published report. In addition, Lyft and Waymo have a separate partnership for self-driving tests using Fiat Chrysler minivans, while Ford has also expressed interest in using its own Chariot rideshare for autonomous vehicle purposes.

But with Ford working with Lyft, it remains to be seen how a demarcation of self-driving assets and the revenue they derive with be determined — or even if they can be. After all, questions abound whether Ford will sell outright or lease its autonomous vehicles to Lyft, or if it will have a relationship in which Ford receives revenue in perpetuity from Lyft from autonomous vehicle rides taken.