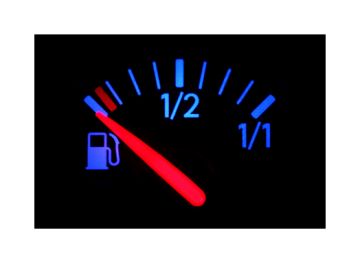 Admit it: You’ve been there. We all have. You were making great time. You were trying to beat rush hour. You wanted to wait until the next food stop or bathroom break. But you cut it too close. Your fuel light came on.

And now you’re in the middle of nowhere, with no idea how far it is to the next gas station. What do you do?

“The first step is, repeat after me: ‘Our father, who art in heaven … ,’ ” AAA Technical Services Manager Michael Calkins suggested in jest.

But once you’re done praying and/or panicking, it’s time to dab the sweat off your forehead, let the blood flow back into your white knuckles and make some rational decisions.

We consulted automotive experts at AAA and Universal Technical Institute to compile a list of best practices when you’re running on empty with no filling station in sight. Some of these may seem like common sense, but in an informal survey of even our automotive-savvy team members here at Cars.com, there were plenty of misconceptions.

Here are six things you should do when running out of gas:
1. Get your bearings
Calkins said the first thing you should do is pull over and locate the nearest gas station using your car’s navigation system or your smartphone (AAA has an app for that).

2. Slow your roll
Cars are the most fuel-efficient at 35 to 45 mph, Calkins said. You have to consider traffic laws and safety if you’re on a fast-moving interstate highway, but the point is: Don’t speed up to try to get to the gas station faster. Slow and steady wins this race.

3. 86 the A/C
Scott Keene, education manager at UTI in Lisle, Ill., explained that turning off the air conditioning reduces engine stress, saving precious fuel, and should be done immediately. “As the electrical load in the car increases, you are increasing the strain on the alternator, which in turn increases the demand from the engine that results in a decrease in fuel economy,” Keene said.

4. Axe accessories
For the same reason as above, turn off the stereo, especially a high-powered one, along with all other electrical devices, such as charging phones. The fuel savings may be small, but: “It could be the difference between pushing the car two blocks and coasting up to the pump,” Calkins said.

5. Roll ’em up!
Keep your windows rolled up to reduce wind resistance. We know, we know, but yes: You have to turn off the A/C and keep the windows rolled up. You should’ve thought of that before your tank got low.

6. Coast if you can
Calkins suggested giving your engine intermittent breaks by using the lay of the land to your advantage and shifting into neutral when going downhill. But don’t shut off the engine, he said, as the resulting loss of power steering will make maneuvering the car dangerously difficult.

The bottom line is to never get to that point in the first place, no matter how you rationalize the risk.

“If your fuel is getting down to a quarter tank,” Calkins said, “try to shut down that inner voice and just stop.”

Read more of the original article at Cars.com.

Apr 25, 2016connieshedron
Don’t Text and Drive, or the Feds Will Slide Into Your DMsRegister Now for NAFA's CAFM® Information Management Boot Camp -- May 3 & 4!