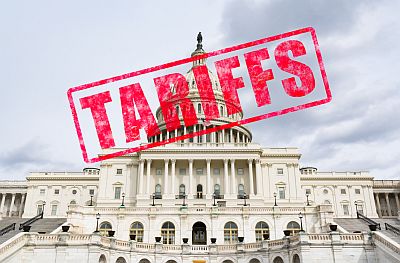 NAFA Lobbies for Rollbacks and Four Other Fleet-Related Issues

That was the word last week at NAFA’s DC Fly-By, its annual meeting of its Government Affairs Committee. Twelve members of the committee spent two days in the Washington D.C. area to hear presentations by executives from industry and auto industry trade associations, Congressional staffers, and a representative of the U.S. Department of Energy’s Office of Vehicle Technologies.

After a series of presentations, organized by Pat O’Connor, NAFA’s U.S. legislative counsel, and NAFA Board member Maria Neve, the committee peeled off on Friday to lobby the offices of 15 key of members of Congress on five fleet-related issues on which NAFA has taken an official position. These include:

NAFA’s Government Affairs Committee consists of fleet executives and managers from the corporate and government world and representatives of fleet suppliers. On tariffs, guest presentations and conversations among members of the committee revealed that:

Hit with higher prices, growing numbers of consumers across the have deferred auto repairs and routine maintenance, threatening the safety of the nation’s roads, said one of the committee’s guest speakers, Catherine Boland, vice president of legislative affairs for the Motor & Equipment Manufacturers Association.

According to Auto Care Association, which represents more than 500,000 independent automotive aftermarket manufacturers, distributors, repair shops, marketers and retailer, Americans have a total of $24.9 billion in deferred automotive preventive maintenance.

The Trump administration began setting tariffs on a variety of imports last year. In March 2018, it imposed tariffs of 25% on steel and 10% on aluminum. In separate moves, it set and escalated tariffs on goods imported from China, a major source of auto parts and accessories.

In addition, Trump has proposed a 25% tariff on imported cars and parts, which he claims represent a threat to national security.  The President postponed the implementation of the tariff last May, pending the completion of an investigation by the Commerce Department.  By law, by the middle of November Trump either implements the tariff or issues another six-month postponement.

NAFA’s Government Affairs Committee visited the offices of Senators Pat Toomey (R-PA) and Rob Porter (R-OH), who have introduced competing bills to block the president’s ability to establish tariffs for reasons of national without Congress’s approval. Members of NAFA’s committee visited both Senators’ offices to ask for their continued opposition to Trump’s auto-related tariffs.

The independent Center for Automotive Research has estimated that a 25% percent tariff applied to all auto imports could raise the average price of a car sold in the U.S. by as much as $4,400.  NAFA’s briefing document for committee members said, “Far from strengthening our national security…[the] tariffs would weaken the health of the U.S. auto industry and with it the overall economy…and would be detrimental to national security.”

The briefing document went on to say that the tariffs “will be disruptive to virtually every industry sector, significantly increasing the cost of vehicle acquisition and maintenance and negatively impacting vehicle fleet turnover as the deployment of safer and cleaner technologies is delayed.”  It added that they would also have a negative effect on “U.S. leadership in future innovations on leading-edge technologies, from autonomous vehicles to electrification.”