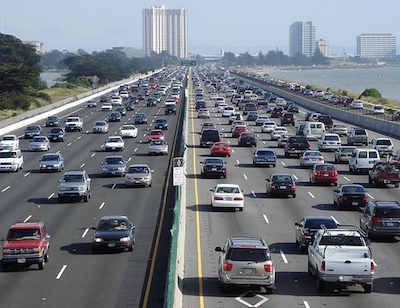 Population growth, GDP growth, decline in fuel prices, and an increase in car ownership. These are the main factors that, according to a report released today by Seattle-based INRIX and the Centre for Economics and Business Research will lead, in the next sixteen years, to a 50 percent rise in gridlock costs in the U.S. In short, this means that if, in 2013 traffic congestion cost Americans $124 billion in direct and indirect losses, this number will rise to $186 billion in 2030.

Assuming, of course, all things remain equal and nothing is done to address the situation. Well, these are impressive numbers, data that most probably will be quoted in the coming years by experts and politicians to legitimate one transportation policy or another, so it’s a worth spending a little time trying to understand how researchers were able to calculate them.

Data about delays caused by congestions were based on the INRIX index: the company – whose mission is simply ‘solve traffic worldwide’ (no less) – collects data from more than 180 million vehicles and devices out on the road every day, in a number of ways: from satellite navigation systems, GPS in cars and trucks, information gathered by cellular carriers, and also through a devoted smartphone application.”

“We take all of this anonymous data and process it together to figure out what’s happening on the roadways across 40 different countries in the world – the company’s CEO, Bryan Mistele says.”

As for current estimates, the CEBR used these data to establish the burden imposed on households by peak traffic congestion, considering three main sources of direct cost: time wasted whilst delayed in congested traffic; fuel wasted and the effect of traffic congestion on the environment. It also considered indirect costs, given that it is more expensive and time-consuming to transport goods or attend meetings in traffic congested cities.

Evaluating both direct and indirect costs, the study found that in 2013, $78 billion resulted from time and fuel wasted in traffic (direct costs) and $45 billion was the sum of indirect costs businesses passed onto American consumers. Los Angeles is the real Carmaggedon, the most auto-centric city in the States, which accounts for nearly 20 percent of the country’s total congestions costs.

The study is not limited to the United States, anyway, but also takes into account the economic and environmental costs associated with road congestion in the UK, France and Germany as well as the most congested cities in each of these countries.

But it’s the extension to the USA that’s the real news, as the other three nations were already covered in a previous study by CEBR commissioned by INRIX, although data and forecasts have been updated. Enough with the methodology. Now, let’s ask ourselves: what can be done to improve the situation? The first thing that springs to mind is improving mass transit; but that’s not likely to be an universal panacea.

Read the Entire Story on Forbes.com