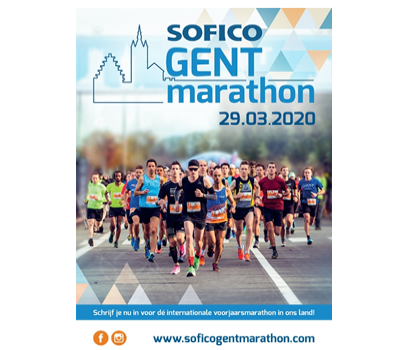 Global automotive finance, leasing, fleet and mobility management software provider, Sofico, is sponsoring the Ghent Marathon in Belgium as part of a drive to increase visibility outside its niche market, to help it better attract talent for future growth.

Sofico has announced the two-year sponsorship deal with the highly popular event which attracts entrants from all over Europe. The Sofico Ghent Marathon, which takes place on Sunday, March 29, will be run through the historic center of the city for the first time.

Sofico’s Chief Technical Officer and co-founder of the event, Piet Maes, said: “We are extremely delighted to tie Sofico’s name to the biggest spring marathon in the country.

“It gives an enormous boost to our colleagues, dozens of them have already registered. We have made a conscious choice for a participation sport, which fits in nicely with our company’s vision for a healthy work-life balance.

“The icing on the cake for us is the passage of the race through the city’s Technologiepark, the hub of the future and site of our headquarters. It goes without saying that it is our ambition to gain more visibility as an employer in the region. We are growing fast but are constantly looking for new talent,” he said.

Sofico enjoyed a year of global success in 2019 with implementations of its Miles software solution in a number of new countries and an increase in employees to record levels worldwide.

As part of the expansion, 70 new employees were recruited in locations around the world to take the total headcount to around 340. Sofico Services Netherlands and Sofico Services Mexico added nine and seven staff to their headcount. This means both country offices are now fully staffed, following their foundation in 2016 and 2017 respectively.

For Sofico Services Germany and the Sofico Services UK, which increased by four and seven personnel respectively during the year, Sofico is still looking to increase its headcount.

Part of Sofico’s worldwide success has come from adopting a local office approach for key markets, rather than organizing everything centrally. The company has opened four additional local offices since 2016, to better serve customers in the Netherlands, the UK, Germany and Mexico.