What Kennedy and Reagan Can Teach Trump About Taking Responsibility 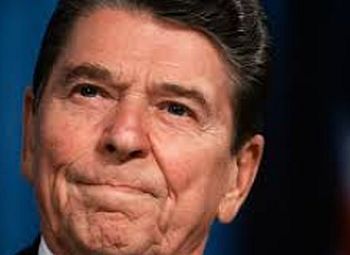 Presidents don’t have the luxury of whining.

President Trump held his fire for a little over a day before tweeting his response to the appointment of Robert Mueller as Special Counsel to investigate Russian interference in the 2016 Presidential election. His tweets were true to blustery form. He complained of a “witch hunt” and pointed fingers at both Hillary Clinton and President Obama for not having a special prosecutor appointed to investigate their “illegal acts.” Earlier in the day at a commencement address at the Coast Guard Academy Trump said, “No President in history… has been treated worse.”

The following day at a press conference with Colombian President Juan Manuel Santos, Trump was more subdued. In his opening remarks as well as when answering questions about Venezuela, he seemed in control, almost presidential. But when questions about the Russia story arose, rather than defend himself he became defensive. “I think [the investigation is] totally ridiculous. Everybody thinks so. Everybody, even my enemies, have said there is no collusion.”

It doesn’t take a scientist – rocket or political – to say that Trump has done exactly the wrong thing. By responding with vitriol, he delights those who think him a fool and disappoints those who think he’s doing a good job. Sadly, from what we know from published reports, this President spends little time on history so let me suggest two incidences of recent presidential history that Trump should know well.

First example is John Kennedy’s acceptance of his role in the failed Bay of Pigs Invasion in April 1961 when Donald was nearly 15. The CIA-run operation, begun under the Eisenhower Administration, resulted in the capture of over 1,200 insurgents and ultimately the strengthening of the nascent Castro regime. Kennedy blamed himself for approving the operation and in public held himself solely accountable. “There’s an old saying that victory has a hundred fathers and defeat is an orphan … Further statements, detailed discussions, are not to conceal responsibility because I’m the responsible officer of the Government.” The public liked what they saw from the young president and gave him a pass. Later Kennedy joked that if he had known how his poll numbers would have soared – into the 80s – he might have called for the invasion to occur sooner.

Second example is Ronald Reagan’s acceptance of responsibility in the Iran-Contra Affair in April 1987 when Trump was about to turn 40. Reagan took to the airwaves and revealed his role in the deal that used Nicaragua as the conduit for U.S. arms that were traded for Iranian-held hostages, something Reagan previously had denied. “There are reasons why it happened, but no excuses,” Reagan said. “It was a mistake. I undertook the original Iran initiative in order to develop relations with those who might assume leadership in a post-Khomeini government.” As with Kennedy, the public who genuinely liked Reagan accepted his apology and a potential impeachment was averted. His popularity also returned, scoring him a 64% approval by the time he left office two years later.

Politics aside, when a President complains he puts himself at the center of the story. Wrong! Presidents, like all elected officials, are hired to do the people’s business. You don’t get to choose your issues and you do the best job you can. Some people will side with you. And some will not. That’s what happens when you are in charge. And if you cannot adjust to it, then you are letting down the very people who expect you to work for them.

My advice to President Trump – as well as to anyone who has made a mistake (which includes all adults) — is to recall the words that Ronald Reagan used in closing to his TV address on Iran-Contra.

“Now, what should happen when you make a mistake is this: You take your knocks, you learn your lessons, and then you move on. That’s the healthiest way to deal with a problem… You know, by the time you reach my age, you’ve made plenty of mistakes. And if you’ve lived your life properly — so, you learn. You put things in perspective. You pull your energies together. You change. You go forward.”

No tweets. No excuses. Accept responsibility. Make amends and move on.

John Baldoni is an executive coach/educator and the author of MOXIE: The Secret to Bold and Gutsy Leadership. Twitter @JohnBaldoni

Read the original article in Forbes.