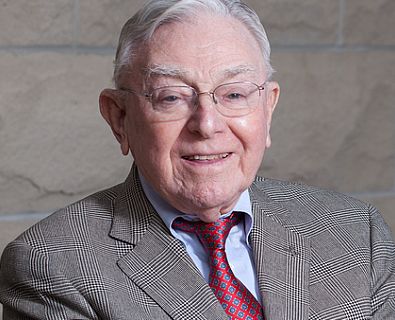 Holman Enterprises, a global automotive services organization, is saddened to announce the passing of Chairman Emeritus Joseph S. Holman on Thursday, December 12. Joseph (Joe) Holman, 93, led the evolution of the family-owned business, which was founded by his father Steward C. Holman, from a single Ford dealership in New Jersey into an international automotive services organization comprised of seven business units before eventually passing the torch to his daughter Mindy Holman.

“My father lived a vibrant, extraordinary life, embracing and enjoying each day to its fullest for more than 93 years. He will be deeply missed by many but his spirit will endure through the indelible stories and memories he leaves behind in all of us,” said Mindy Holman, Chairman of the Board, Holman Enterprises. “My family and I have been incredibly blessed to work alongside my father for so many years as he taught us about the privilege and responsibility of stewarding a family business. He treated employees, customers, business partners, and the community like part of his own family and together, we will continue to live the Holman Way and build upon his legacy.”

Son of Katherine and Steward, Joe Holman grew up in Southern New Jersey along with his sister Eleanor, graduating from Merchantville High School in 1944. Following his high school graduation, Holman enlisted in the Navy, where he achieved the rank of Radio Electronics Technician, 3rd Class.

After completing his service with the Navy, Mr. Holman attended Princeton University where he played varsity basketball for four years. While playing for legendary coach Franklin “Cappy” Cappon, Mr. Holman was named team MVP twice, and in his junior year, the team captured the Ivy League title. Mr. Holman would go on to graduate from Princeton University in 1950. Shortly after his graduation from Princeton, Mr. Holman would marry his high school sweetheart and soon-to-be wife of 59 years, Jean Preston Polk. Together, the couple raised three children, their sons Jeff and Steve and daughter Mindy.

Following in his father’s footsteps, Joe Holman joined the family business in July of 1950. During the next sixty-nine years, Mr. Holman oversaw the transformation of his family’s business from a single Ford dealership in Maple Shade, New Jersey, to one of the premier automotive organizations in the industry. Today, Holman Enterprises is comprised of seven business segments that support diverse sectors of the automotive industry, employing nearly 7,000 people.

“Words cannot begin to express our collective sadness for the passing of Mr. Holman. He truly embodied the core values that have guided our company for 95 years and his memory will continue to inspire the entire organization for many years to come,” said Carl Ortell, CEO, Holman Enterprises. “His unwavering passion for life, his family, our people, the community, and his company will forever be the foundation of our organization.”

While sure to be remembered as a remarkable businessman, many will point to his kindness, humility and true love for his “people” (a term he would always use instead of employees because to him, employees were always people first) as Holman’s most endearing hallmarks. Up until mere days before his passing, Holman was a constant fixture at the various Holman Enterprises locations and he enjoyed nothing more than connecting and engaging with his colleagues.

The company plans to honor Joe Holman’s legacy during private arrangements for employees in the days ahead and public services later this week. In lieu of flowers, memorial contributions may be made to Urban Promise, P.O. Box 1479, Camden, New Jersey, 08105.