Donna Setaro Brings Her Message “Slow Down, Move Over, It Is The Law” To NAFA’s I&E 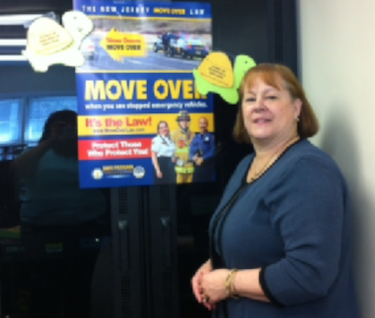 It happens every day somewhere in North America. It puts the lives of those who help us in jeopardy…and it is against the law. Disregarding Move-Over laws contributes to the numbers of deaths of police and emergency responders, but that can change with education. Move-Over law advocate Donna Setaro will be a Keynote Presenter at NAFA’s 2016 Institute & Expo, offering a powerful, thought-provoking presentation.

The I&E attracts thousands of fleet professionals from throughout the world for four days of education, networking, and motivation to bring back to the office. The 2016 conference takes place April 19-22 at the Austin Convention Center in Austin, Texas.

As Founder of the Move-Over Awareness Campaign in New Jersey, Setaro has given presentations regarding the Move-Over law to over 55,000 people. “Most presentations I give are to an audience of around 300 people,” Setaro said. “On average, less than 15 percent in that audience are aware of the existence of Move-Over laws.” Many offenders are conscientious and otherwise law-abiding drivers who were either too distracted or thoroughly unaware of how to respond to these events.

“Beyond being a huge risk for drivers as well as for emergency responders, every fleet manager in North America should make sure this risk is not being shouldered by their employees and companies/organizations,” said NAFA’s Chief Executive Officer, Phillip E. Russo, CAE. “NAFA is excited to have Donna speak in front of our attendees with this critical message.”

Setaro believes that education is the answer. Sadly, there will always be reckless drivers and ignorant drivers alike. By making sure that everyone who gets behind the wheel knows there are laws, considerable penalties, life-altering and life-ending consequences, perhaps drivers will think a moment longer before making a tragic choice. “If you’re found guilty of not dropping the speed down under the posted limit, usually 20 mph under, and of not moving to the next lane, and these result in you killing someone, you will be charged with manslaughter and possible imprisonment,” Setaro said.

“For fleet managers, delivering that understanding to every driver needs to be as common as assigning the vehicle,” said Russo.

Nov 23, 2015Janice
The Future of the Automobile is Being Reshaped in CaliforniaHow Would You End Distracted Driving?