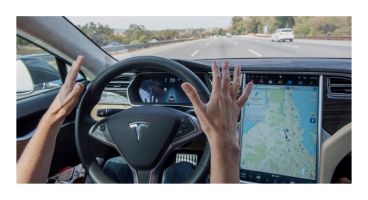 A Texas man said the Autopilot mode on his Tesla Model S sent him off the road and into a guardrail, bloodying his nose and shaking his confidence in the technology.

He doesn’t plan to sue the electric-car maker, but his insurance company might. Mark Molthan, the driver, readily admits that he was not paying full attention.

Trusting that Autopilot could handle the route as it had done before, he reached into the glove box to get a cloth and was cleaning the dashboard seconds before the collision, he said.

The car failed to navigate a bend on Highway 175 in rural Kaufman, Texas, and struck a cable guardrail multiple times, according to the police report of the Aug. 7 crash.

“I used Autopilot all the time on that stretch of the highway,” Molthan, 44, said in a phone interview. “But now I feel like this is extremely dangerous. It gives you a false sense of security. I’m not ready to be a test pilot. It missed the curve and drove straight into the guardrail. The car didn’t stop — it actually continued to accelerate after the first impact into the guardrail.”

Molthan’s experience — while not as serious as a fatal crash that federal regulators are investigating — still highlights the challenges ahead in determining who is to blame when semi-autonomous vehicles are involved in accidents. Insurance claims involving Tesla’s Autopilot are largely uncharted territory, in part because driver behavior is still a contributing factor

Cozen O’Connor, the law firm that represents Molthan’s auto-insurance carrier, a unit of Chubb Ltd., said it sent Tesla Motors Inc. a notice letter requesting joint inspection of the vehicle, which has been deemed a total loss.

Tesla said it’s looking into the Texas crash. Tesla stresses that Autopilot is only an assist feature — that drivers need to keep their hands on the wheel and be prepared to take over at any time

Tesla’s driver-assistance features, which the company calls Autopilot, have been in the spotlight in the wake of a fatal crash in Florida on May 7.

Probes by the National Highway Traffic Safety Administration and the National Transportation Safety Board of the Florida crash are ongoing. After non-fatal accidents in Montana and Pennsylvania, Consumer Reports called on Tesla to require drivers to keep their hands on the steering wheel and to change the feature’s name to avoid confusion.

Scrutiny around Autopilot is heightened in part because the federal government is drafting guidelines, expected to be released this summer, for automakers racing to bring fully self-driving cars to market. Ford Motor Co., while announcing plans to produce a fully autonomous vehicle for use by ride-hailing services this week, said it would avoid adding incremental technologies because they leave the driver too detached — in “no-man’s land” — to take over in a dangerous situation.

Read more of the original article in Automotive News.

Aug 22, 2016connieshedron
In the U.S., VW Owners Get Cash. In Europe, They Get Plastic Tubes.Routes Diverge in the Race to Remove the Fallible Driver