Routes Diverge in the Race to Remove the Fallible Driver 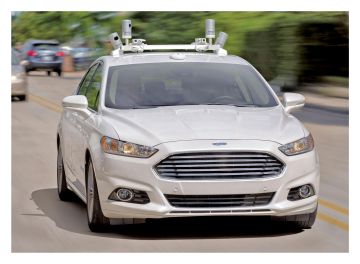 Ford Motor Co. last week said it would put driverless cars on the road for ride-hailing and ride-sharing fleets in just five years.

Then Uber said it would start ferrying passengers with autonomous Ford sedans and Volvo SUVs in a matter of weeks.

In between, General Motors, Tesla, Google, Nissan Motor and possibly Apple are among those aiming to roll out self-driving vehicles as well.

It has become a race in which every contender is aiming for a different finish line.

For the legacy automakers, falling too far behind raises the specter of a Kodak-like obsolescence.

“It’s now clear that the next decade is going to be defined by the automation of the automobile,” Ford CEO Mark Fields said. “If somebody would have told you 10 years ago, or even five years ago, that the CEO of a major American car company is going to be up here announcing the mass production of a vehicle without a steering wheel, they would have told you you’re pretty crazy.”

All autonomous-car projects ultimately have the same goal — remove the fallible human driver — but the paths they’re blazing to get there diverge widely.

Ford has staked its future on a grandiose moonshot, taking more time to test exhaustively before making one giant leap to full automation. Meanwhile, Uber, GM and Tesla are more gradually shifting responsibility from the driver to the vehicle, essentially putting customers in the midst of their development processes.

Another big difference: Ford and Google are getting rid of the steering wheels and pedals as they focus on full autonomy, while GM CEO Mary Barra says those controls should stay for the foreseeable future to provide an added layer of safety. And GM already has its ride-hailing partner lined up whereas it appears that Ford will fill in that part of the equation later.

Tesla, which has said its cars will be able to drive themselves across the country by 2018, already offers a driver-assist feature it calls Autopilot. But that has come under fire after a fatal crash in May, when a Model S operating in Autopilot mode failed to identify and stop for a tractor-trailer turning in front of it.

Uber and Volvo Cars last week announced a $300 million deal that will deploy a fleet of 100 self-driving XC90 plug-in hybrid crossovers this fall in Pittsburgh. Two Uber employees will sit in the front, one ready to take control of the vehicle if needed and a passenger taking notes. Uber also said it would start using autonomous Ford Fusions in Pittsburgh, the home of its self-driving research lab, though it has no formal partnership with Ford.

“This alliance places Volvo at the heart of the current technological revolution in the automotive industry,” Volvo Cars CEO Hakan Samuelsson said in a statement.

Read more of the original article at Automotive News.