Why Self-Driving Cars *Can’t Even* With Construction Zones 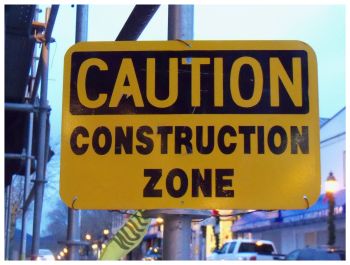 If you’re a human driver, road construction probably annoys you: one more thing clogging traffic on your way home. If you’re a self-driving car, though, it can be devastating.

Work zones flummox the future rulers of our roads because they override or obliterate the sturdy markers by which the vehicles are taught to navigate.

That’s why self-driving pioneers like Google and Delphi cite construction as a common reason their human engineers take control of the wheel while testing: The cues designed for human drivers can stump advanced computer systems.

This gets to the central challenge of autonomous driving: How do you teach machines to deal with the chaotic, grubby humanity of our roads, where the rules bend so easily? And how do you do it fast enough to meet the deadlines of the companies that have pledged to commercialize this technology in the next five years or less?

The answer it seems—at least when it comes to navigating construction zones—isn’t to solve the problem. It’s to sidestep it altogether.

The Problem at Work

First issue for the poor vehicles and computers that run them: The look of a construction zone changes based on where it is and what’s being done. Workers filling a sinkhole in Philadelphia won’t use the same signs as their brethren repainting lines on California’s 405 freeway. And while engineers can expect human drivers to understand any improvised arrangement of placards, blinking arrows, and sign-spinning workers, that’s way harder for a computer.

“Work zones are so dynamic, so site-specific in a lot of cases, that it’s really difficult to try to write a code to tell the vehicle, ‘When you see this, do this,’” says Jerry Ullman, a research engineer specializing in work zones at the Texas A&M Transportation Institute. One lazy hand wave from a tired construction worker—or just an errant hello to a colleague—could send a confused autonomous vehicle careening into a dump truck.

Adding to the kerfuffle: State and local DOTs do not have their acts together. Self-driving car companies hoping to avoid active construction sites are screwed from the get-go, because the vast majority of states don’t bother with databases detailing what work is happening where. Construction companies are usually given the latitude to start and stop work when they feel like it, and they don’t always follow standards for setting up markers to warn drivers in advance.

This isn’t much of an issue for semi-autonomous vehicles that still come with steering wheels and pedals—when the car gets stuck, just have the human take over (though that brings up other problems). But if you want to open cars to people who can’t drive, or use them for delivery services, you can’t rely on a human driver for backup.