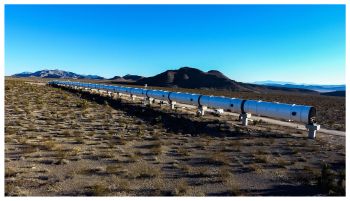 Hyperloop One has announced the completion of a test Hyperloop track in Nevada, and is showcasing 11 potential Hyperloop routes across the U.S. as it pushes what it’s calling its “Vision for America.”

Hyperloop One is the most visible of three startups now pursuing Elon Musk’s proposal for a near-supersonic ground transportation system, which it touts as a potential economic game-changer.

The test track, which the company calls DevLoop, is actually not a loop at all, but a 500-meter straight shot.

In a fittingly hyperbolic mode, the company claims the previously empty site of the new track will now “stake a claim as a future national historic site.” More concretely, it will allow the company to build on last year’s tests of its mag–lev technology. Levitation is perhaps the easiest ingredient of the Hyperloop, which will operate in a near-vacuum to escape drag at high speeds.

Hyperloop One also showcased 11 potential future routes at a Washington, D.C. launch event last week. Those include links that could take riders from Las Vegas to Reno in 42 minutes, Chicago to Columbus in 29 minutes, or Denver to Boulder in 5 minutes. Other possibilities include New York-D.C., Portland to Seattle, Columbus to Pittsburgh, Kansas City to Columbia (Missouri), Dallas to Austin, Miami to Orlando, and Los Angeles to San Diego.

Hyperloop One argues that such links would have big economic impacts, including allowing manufacturers to relocate to cheaper land and letting workers live farther from expensive city centers, all while reducing hours lost to traffic congestion.

One interesting note here is Hyperloop One’s emphasis on commute times, with freight given second billing. Though both applications face challenges, Hyperloop One execs have previously said freight is the company’s primary business focus.

But subsonic freight is unlikely to capture the public imagination, and Hyperloop One needs broad buy-in to make any of these projects happen. Though the company is very well-funded, it will still need logistical cooperation and, most likely, public capital to build routes. Given the challenges cities and regions already have funding existing infrastructure, that may be the biggest obstacle to turning these visions into reality.