Hydrogen On The Rise At CES, From Drones And Daimler Trucks To Toyota’s City Of The Future 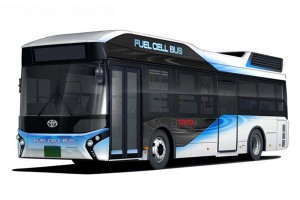 This year’s CES show indicates hydrogen, which has had a negligible impact as a clean fuel for passenger cars, is getting a new shot as a power source for heavy-duty trucks, buses, drones and cities.

Daimler has been working to commercialize fuel cell vehicles since the 1990s, and though it currently offers the F-Cell sport-utility vehicle in a few markets, the parent of Mercedes-Benz is shifting its focus to heavy trucks and buses, says R&D chief Markus Schäfer.

Toyota is applying decades of hydrogen R&D to serve as the core power source for “Woven City,” the futuristic neighborhood it plans to construct near Mount Fuji starting next year.