Volvo’s Future Includes a Plug for Every Car 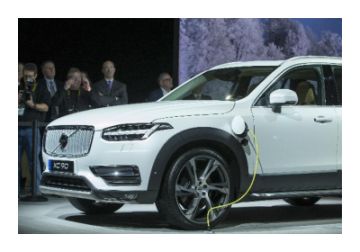 After seemingly hemming and hawing for several years, Volvo has announced its global electrification strategy. The Swedish premium automaker has read the tea leaves and decided that electrification is the way. It plans to offer a plug-in version of all cars in its vehicle line up, build smaller vehicles, and offer a pure electric vehicle by 2019.

Key to the plan will be its upcoming line of 40-series vehicles built on the Compact Modular Architecture (CMA), which has been designed from the start with electrification in mind.

This new architecture should make it easier for the brand to develop a range of body styles that meet consumer needs, from compact wagons, hatchbacks or crossovers, depending on its market, and with a variety of powertrains. The new architecture should enable Volvo to accommodate conventional engines, electric motors or plug-in hybrids, and likely without compromising interior or cargo space.

Volvo currently offers a gasoline plug-in hybrid XC90 T8 SUV in the U.S., and a plug-in XC60 variant should show up in the near future. The manufacturer currently sells a plug-in diesel hybrid version of its V60 wagon in the EU, which for obvious reasons will not make it to the US shores.

Volvo has recently been caught up in the diesel emissions row, after several of its diesel-powered vehicles were found to produce more emissions than previously reported. The electrification strategy seems to mark a shifting of the winds towards batteries and away from the once favored diesel engines.

“We have come to a point where the cost versus benefit calculation for electrification is now almost positive,” said Dr Peter Mertens, Senior Vice President for Research and Development in a news statement. “Battery technology has improved, costs are going down, and public acceptance of electrification is no longer a question.”

But perhaps a bigger struggle for the automaker than deciding on whether to use diesel, gas, electric or combination of some sort is their campaign to find a vehicle and price point that attracts buyers. The brand is most known for its advanced safety features, but as more vehicles in the market offer the same technology–albeit at potentially lower thresholds–Volvo struggles to maintain its niche.