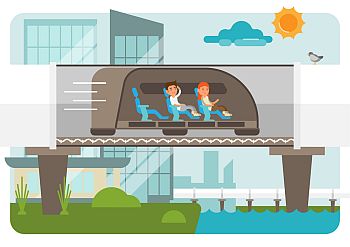 After starting out in a garage six years ago, Hyperloop One has since become Virgin Hyperloop and now recently sent its first-ever riders for a test in the company’s 0.31-mile DevLoop test site in Las Vegas, after performing over 400 empty tests.

On such short distance, the freshly-unveiled XP-2 vehicle accelerated to 107 mph while carrying co-founder and CTO Josh Giegel and director of passenger experience Sara Luchian. Needless to say, this pace is far from the venture’s ultimate goal of moving 28-person pods at over 600 mph, but it’s a step in the right direction.

Before connecting major cities through a hyperloop network, Virgin’s team needs to raise $500 million to establish a six-mile test facility in West Virginia, after which the system could be certified in 2025 or 2026. Mind you, U.S. President-elect Joe Biden recently announced that he wants to see zero-emission public transit for cities with over 100,000 people, which is a significant commitment towards a greener future that could just as well include a high-speed hyperloop system.