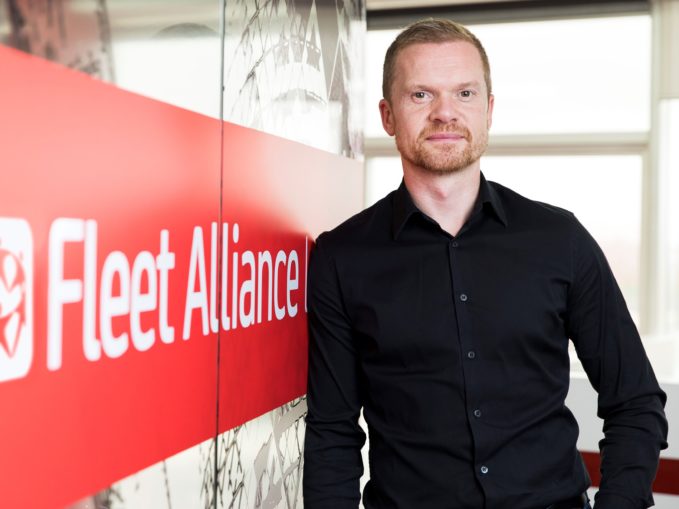 Despite the disruption in business caused by last year’s pandemic, the fundamentals of the UK fleet industry, like the US, remain strong, says Martin Brown, Managing Director of Fleet Alliance headquartered in Glasgow, Scotland. As in the US, highlights include the rapid growth in EV registrations; advances in telematics and its integration with 5G and artificial intelligence (AI). The UK’s long-standing commitment to environmental concerns is helping to shape fleet decisions, too.

Founded in 2002, Glasgow-based Fleet Alliance Ltd. manages just over 30,000 vehicles with a combined asset value of about £1 billion.In line with the industry’s strength, Martin is pleased to report that Fleet Alliance is heading for a potential record year. “If you told me 12 months ago that we’d see that level of growth, I wouldn’t have believed you,” admits Martin. “Yet, despite fewer business miles being driven in the past year, that change might be a better fit for electric vehicles.”

He goes on to explain: “Lower mileage and shorter journeys mean that it’s easier to get the electric vehicle uptake in. It also takes away some of the range anxiety concerns. We are finding that people are less likely to travel on public transport, so we might have more people taking a car rather than taking the train and the bus.  Overall, the market has yet to settle down, and I don’t think we know how it’s going to look in maybe 24 or 36 months.”

According to the Fleet Alliance head, financial incentives for a company car driver to take an electric vehicle or a hybrid are brilliant: “The company car space is likely to grow, even allowing for the reduced miles, because some of the people that previously would have opted out of the company car scheme now find a very low monthly benefit-in-kind tax situation.

Discussing the road to electrification in the UK, Martin says that he believes the challenges businesses face to meet the 2030 deadline on the sale of new petrol and diesel cars and vans in the UK are being overcome: “While it’s slightly daunting to look and see it being so close, the pace of EV growth in the UK has been phenomenal. I’m actually quite optimistic despite news coverage about a lack of infrastructure.  I believe that infrastructure is growing at pace.

“The issues that we had 12 months ago aren’t the issues that we have today. Range anxiety is lessening as the range of the vehicles improves, and I think that some US players like Tesla, have played a big part in fostering EV growth.

Nearly 40 percent of our orders so far this year have been for non-combustion engines,” Martin touts. “We are slightly ahead of the market because we embraced green technology early on. Fleet Alliance is one of a number of EV100 companies committed to ‘zero carbon’ by 2030.

“Even if you break down that 40 percent figure, 25 percent of those are hybrids, including some plug-in hybrids. But these are necessary stepping-stones in the journey to full electrification. Another accomplishment to consider is that our 15 percent battery electric vehicle orders this year is twice the UK average of EV registrations.”

Fleet Moves on from Brexit

The uncertainty of Brexit’s impact on businesses was and remains detrimental.  However, according to Martin, the impact on fleet at this stage has been negligible: “Without a deal, it would have been much worse. The fact that they got a trade deal done at the eleventh hour was essential for fleet.

“There are still some nuances to be addressed. Of course, the border issue in Northern Ireland presents a difficult struggle.  In fact, we have just decided that it’s not worth the hassle to move vehicles there just now. Fortunately, that is a small portion of what we do.”

While the US auto manufacturers have had to deal with a chip shortage this year, Martin confirms that semiconductor availability is a global problem. He notes, “In our UK market, we’re seeing it’s particular challenge with light commercial vehicles. They seem to be the worst affected, but that shortage of vehicles preceded the chip shortage due to the explosive growth of last-mile delivery market.”  Martin reports that passenger vehicle availability, especially from Japanese and the Korean manufacturers, seems to be improving in the UK.

Martin describes the used vehicle market as crazy, in a good sense: “Values are through the roof. There’s shortages of used cars. It’s really interesting, because I’m now in my 25th year in the contract hire and leasing sector, and you often talk about boom-and-bust periods of used markets being depressed and residual values being under pressure.

“In my 25 years, I must look back at 1998 to see the last significant issue with used values in the UK market. Broadly speaking, the market is booming right now, as it is in the US and elsewhere in the world.”

Martin is excited about the future of fleet in the UK. Incentives for electric vehicles is a bright spot at first blush.  But there is a downside for the UK Treasury given lower tax rates.  He notes that there are discussions about introducing road usage pricing to address this tax revenue shortfall.

Another exciting development is the coming of autonomous vehicles: “I think they are already here to some extent in terms of partially autonomous movements that you have in cars. It is hard to keep up with the pace of change, making it difficult to predict when these things will happen.”

Martin also sees a trend towards subscriptions because, in pure asset management terms, they make sense. He expresses concern, however, about monetizing a product given the logistical challenges.  “Trying to accommodate variations in price from a daily rental through to a four-year lease will be the key, but shorter, more flexible leasing will come,” he predicts.

Mobility as a service is another trend in the UK that will continue: “Would I like an app that makes it easier for me to travel and pay and turn up, take a car, take a bike, book a hotel, do it all in one app? Absolutely. Do I think that will happen? Yes! Again, the pace of change is ferocious, but so is the pace of customer needs that drive new ideas.”

Martin’s final future trend is the environmental movement and what it means for cars: “It’s all good and well saying, ‘We’ve got electric vehicles,’ but if we are fueling our electric vehicles with energy from the energy company’s fossil fuels, what did we accomplish? The commitment to being green is just beginning,” he concludes.

Ed Pierce founded ITA Communication, a B2B marketing agency focused on the fleet industry. He was previously vice president of global branding for Holman/ARI Fleet and has written for International Fleet World, Automotive Fleet, and Fleet Solutions. He is a contributing editor for Fleet Management Weekly.

Jun 12, 2021Janice
The Main Forces Driving the Medium Duty MarketThe 'Word on the Street' is that Fleet's Been Missing Its Human Connection