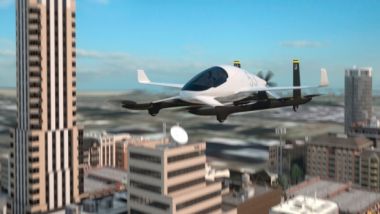 At the Consumer Electronics Show in Las Vegas, the Uber and Hyundai revealed a model of a four-seat, electric flying vehicle that they said you’ll be able to summon for a ride through Uber’s app someday.

The first actual prototype will be ready in 2023, according to a Hyundai spokesperson. A human pilot will fly the air taxi until the companies finalize software to autonomously control it, the company said.

Hyundai is the latest big company to announce that it’s developing a flying taxi for trips around cities and suburbs. Boeing’s flying car prototype made its first autonomous flight in 2019 at a small airport outside Washington D.C. Google co-founder Larry Page has invested in several smaller startups, including Kitty Hawk and Opener, which are developing flying car technologies.