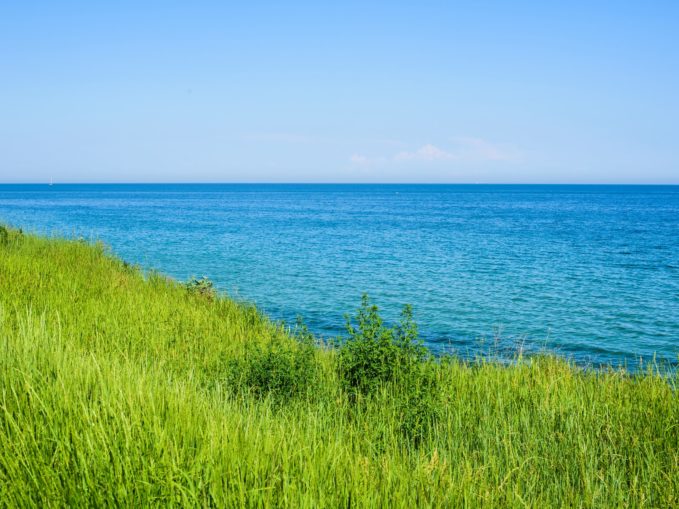 This will make sense in a few – just go with me for a moment.

In what feels like a lifetime ago, 2008 to be exact, I was working for a lawn care company, not as a writer but as a literal on-the-road treatment provider. I and my co-worker Patricio were on a lawn along the New Jersey coast. It was mid-September, and one could feel the chill coming off of the ocean; over the miniature, personal cove below; up the hill; and onto the modest backyard. The actual house was small, but then again, this was the summer home and it was right on the edge of the Atlantic Ocean, so location, not size, was everything.

Patricio was putting down fertilizer with the “Z-Spreader,” something akin to a motorized, stand-up go-cart with a materials hopper in the front casting out the pelletized product. I was pushing the standard spreader along the edge of the property. As you might imagine, you do not risk machines of a couple of thousand dollars near the edge of a drop into the ocean.

The cellphone buzzed in my pants pocket. I answered to hear the voice of the boss of the company. The property security system must have sent a message to its management team that we were there and they, in turn, must have notified the owner who, subsequently, told our boss to stop all treatments immediately. The back ramp of the truck comes down, the Z-Sprayer and spreader are loaded in, and we are gone.

You see, the home was owned by an individual who was a primary partner of a major banking company, and it was about to tumble into bankruptcy, like a Z-Sprayer that rolled too close to the coastline.

The impacts of the 2008 banking crisis and economic downturn were swift and severe. Many who enjoyed the life of living close to the Jersey Shore saw fortunes tested, if not reversed outright. They stopped inessential services – like lawn-greening operations – to staunch the pain of what would come next. Several high-roller customers quit.

Were it not for the foresight of the company owner, who refused no customer no matter how large or small their properties were, the company would have gone under. Many competitors did. They banked on the big money parcels and big vanity that came with it, and that strategy proved riskier than they thought. Meanwhile, the smaller property owners weren’t interested in having lawns that were greener than your envy. They simply wanted a lawn that did not have dead spots.

Make no mistake, finances were tight during this time. You need ten miniature properties to match what you would get from one celebrity lawn application, but there was work, there was income, and there was the promise of continuity.

Fine, you say, but what does any of this have to do with fleet?

Should We Have Seen It Coming?

A bit more history: In 2003, Asia experienced the frightening reality of the SARS (severe acute respiratory syndrome) epidemic. We in the United States were witness to news reports of cities full of people wearing masks, but we felt inoculated from this outbreak by distance. Cut again to 2008, and we’re again seeing people in cities in Asia donning masks. According to reports, eleven outbreaks of H5N1 were reported worldwide in June 2008 in five countries (China, Egypt, Indonesia, Pakistan, and Vietnam). Again, the United States was spared the brunt of the crisis.

2020 is not 2008, and if we had a global economy then, we have a global ecosystem now. Thanks to the Internet and expanded communication, leading to expanded trade and partnership, we share more than money and goods now. Given such an intrinsic level of interconnectivity, it was inevitable that North America would have to deal with something as virulent and life-changing as Coronavirus Disease 2019 (COVID-19). We rode that coastline edge too lucky and too long not to take a tumble.

Yeah, yeah, yeah, woulda, coulda, shoulda. But what should the fleet industry do now? Crucially, we didn’t know what we didn’t know, but we cannot plead ignorance now. The global economy is not going away, and neither are the pros and cons associated with it. Reading the signs, even if they’re originating halfway around the globe, is key.

Fleet managers won’t be able to act upon every minor movement taking place in Europe, Asia, Australia, and all…and they shouldn’t have to. There are so many day-to-day decisions to make that it would be impossible to also worry about the world outside of one’s control, and probably very bad for one’s well-being, too.

Even so, one should not proceed with the blinders on, especially now that we have lived through what we thought was unthinkable. Take the time to see what is happening out there and think about what that might mean for your operations. Will it mess up the supply chain? Will it cause your utility to slow down, as many corporate fleets deemed inessential found through COVID-19? Likewise, will it cause your utility to spike, as first responders, emergency vehicles, and food/goods delivery fleets experienced?

In this, it might be useful to think like a global fleet manager, even if you serve a municipality. Events over there can have implications for life over here.

Keeping your eyes open to an interconnected world is one thing. Acting upon that intel is another, and that depends on your organization’s emergency plan. Sadly, most emergency plans don’t factor in floods until after the flood, don’t prep for the tornado you never faced until now. Now that we’ve faced a major pandemic in our lifetime, we should take the lessons learned into account for next time.

What might that look like? For starters, do you have job-function redundancies should key employees be unable to do the work? Who will fill in for them and are they adequately cross-trained? Are you able to implement work-from-home protocols, social distancing separations, vehicle single-user scheduling, and/or regular cleaning? It’s a lot to think about, no question, but it is better to think about it when you’re not up to your neck in it.

Review your emergency plans and make adjustments now that you know what you know. Determine how large-scale issues will affect your supply chain. Plan ahead not only for slowdowns and furloughs but also for surges. Most of all, having this in your plan helps get you in advance the buy-in you’ll need, minimizing potential pushback when unanimity is required.

We hope to never need to implement these plans once we’re on the other side of COVID-19, but having the worst issues considered, having a roadmap charted out, is insurance. You have it in hopes you never have to use it, but it’s there.

There’s no easy way to say it. People lost their jobs because of COVID-19, and several more may still. If we see another large-scale concern – maybe a second or third wave of the virus, but it could be anything – jobs could be jeopardized again in the future.

Education is essential to making yourself as necessary to your organization’s continuity as possible. The problem is that if you are in the corporate segment, your education requirements may be different than if you are in law enforcement or utility, and so one. There are many functional similarities across fleet types, but there are also specifications.

Corporate often works with fleet management companies. These fleets procure vehicles with a mindset for remarketing and resale, with a lifecycle that maximizes usage value and identifies optimal divestment. A law enforcement vehicle is typically bought for endurance and is upfitted to increase that endurance and expand its unique utility. These vehicles are selected to handle usage before or during extremes. Utility vehicles are meant to work during or after them. Think of downed trees, power lines, and other obstacles. A heavy-duty delivery truck handles and breaks far differently than a vehicle meant for university usage.

If your fleet is deemed non-essential tomorrow and you are let go, what are your skills gaps that might prevent you from getting a new job in the same field but with such alternate specifications? If you go from a fleet that runs petroleum or diesel primarily, are you ready to jump into a job that values electric solutions? Are the preventive maintenance schedules you’ve grown accustomed to applicable in this new setting?

Being a committed student of fleet – all of it – keeps you one step ahead if the unthinkable comes to pass.

The Fool on the Fertilizer Spreader on the Hill

We recently marked the 12th anniversary of the banking crisis and economic downturn. In 2007, there were rumblings of what 2008 might bring. Some acted. Others waited and reacted. Banks went bankrupt as “too big to fail” was put to the test, and the gravity of that fall from grace pulled down the dollar, setting off a chain reaction the world over. From my low-level vantage point behind that fertilizer spreader, I learned how actions miles away would affect me right where I was.

So too, in October 2019, there were rumblings of another virus somewhere. Some acted. Others waited and reacted. This time, we all got to see the effects, many from the (dis)comfort of home. We know now what we know. Use the cliché that you like best, but each of us now has felt the consequences.

Fortunately, this is a resilient industry filled with individuals ready to update that experience portfolio. It’s also an industry that will always be needed in one form or another, evidenced clearly by the toilet paper shortages of April-June and reinforced by the disinfectant shortages right now. We can prepare now, and the only limitations are the will and desire to do so.

Nov 29, 2020Janice
Volkswagen Plans a Lower-Cost Electric Car the Size of a PoloAn Electric Ford F-150 is Coming, but the 700-Mile Power Boost Hybrid is Already a Hit