Tesla’s Semi-Truck and Roadster Charge Ahead 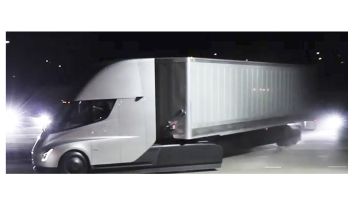 Elon Musk introduced two new Tesla vehicles—the heavy-duty Semi Truck and the speedy Roadster— claiming incredible range and charging numbers that would require either advances in battery technology, or a new understanding of how batteries are put to use.

Musk vowed the Tesla Semi would haul an unprecedented 80,000 pounds for 500 miles on a single charge, then recharge 400 miles of range in 30 minutes, requiring a charging system that’s 10 times more powerful than one of the fastest battery-charging networks on the road today—Tesla’s own Superchargers.

“I don’t think they’re lying,” said Sam Jaffe, battery analyst for Cairn Energy Research in Boulder, Colorado. “I just think they left something out of the public reveal that would have explained how these numbers work.”

Nov 27, 2017connieshedron
Disrupt a Bad CX to Grow Your BusinessHydrogen Could Play a Vital Role in Future Mobility