Tesla’s Model 3 Is Here, and It’s Much More Than an Electric Car 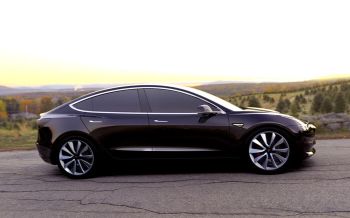 The air was electric in Fremont, California, where a lucky few gathered to witness a momentous moment.

Thirty employees rubbed their hands together in glee, awaiting their prize after months of waiting. Elsewhere around the world, the faithful – the 500,000-odd people who threw down a $1,000 reservation deposit months ago – refresh their email for notifications. Happy Model 3 Day, Tesla fans.

Everyone is excited for a reason.

The arrival of Tesla’s Model 3 signals a new chapter in automotive history, one that erases 100-plus years of the gas engine and replaces it with technology, design, and performance hot enough to make electric vehicles more than aspirational – to make EVs inspirational.

Tech trend-watchers may be getting flashbacks to 2007, when another marquee event felt like it was on the cusp of revolutionizing the world: If Tesla gets this right, the Model 3 will be the iPhone of the car world, leading the way for a whole pack of imitators. It may even steer the world toward a road populated by not just electric vehicles but driverless cars, and realize that reality faster than anyone – even Google – has managed thus far.

For one night, Tesla founder Elon Musk hosted a party to mark his smallish car company’s milestone; but the next day, it’s back to work on building a new, “affordable” electric car – and fighting to become a major player in the competitive car industry.