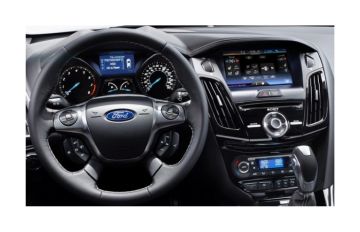 Today I’m saying the division is between those who embrace the connected technology that is leading us toward driverless cars and increased use of entertainment and smartphones, and those who don’t.

Carmakers are struggling to develop a way to blend all the advanced functions of smartphones into a seamless and safely operable system in cars, keeping drivers connected and productive while driving.

Along those lines, there are already: automatic braking and adaptive cruise control systems in conjunction with forward collision warning and mitigation systems; alerts for objects behind and approaching a moving or stopped vehicle; blind spot warnings for vehicles in the blind spot of a side mirror; and lane departure warnings with different levels of alerts.

Tom Gebhard, president of Panasonic Automotive Systems of America, which supplies technology to almost all of the automakers, says 50 percent of U.S. car buyers try most of this stuff, reject it, and never opt for it again. That means the two kinds of people are neatly divided in half.

My young adult kids are part of the technology friendly-half and pair their smartphones with new car controls and audio systems every chance they get. A study just released from Liberty Mutual Insurance reveals that about two-thirds of youthful drivers use apps while driving. My kids are fairly excited by new cars, and the ability to one day click on a phone app and have their cars drive to them autonomously is a desire. I am not embracing connecting my phone to any car.

The new 2017 Chevy Volt I tested recently asked me to connect my iPhone with Apple CarPlay, and I let it. Apple CarPlay, however, didn’t work with Waze, Google’s ticket-saving and information app that I use regularly while driving. I still had to use my iPhone separately and spent a lot of time with my hands off the wheel.

Recently, the large touch-screen on a Honda Pilot asked me to download my contacts into the car. I didn’t want to, so I had to charge my phone using the antique 12-volt lighter socket to stop the USB-connected requests.

I use contacts as a way to store passwords and personal identification numbers (mildly disguised), and the thought of sending these to a possibly hackable database makes me shudder. My kids, shockingly, told me they don’t really mind if they get hacked; it’s not a concern yet. I love their trust in the goodness of humanity.

Today’s technology is driven by traffic congestion — Americans spend the equivalent of five entire days a year in traffic. Components of connected cars include stop-and-go technology — like that on Ford’s new 2017 Fusion — that automatically accelerates and brakes for the driver when stuck in slow traffic.

It’s called semi-autonomous technology, and if the car is stopped for more than three seconds, it will prompt the driver to tap a resume button before accelerating again. The automatic braking is sophisticated. It will sense stopped cars and pedestrians and “precharge” the brakes, promising the shortest of stopping distances and reducing crash severity.

Read more of the original article in The Detroit News