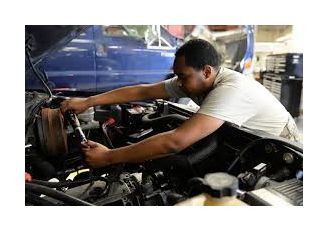 If the sticker shock faced by car shoppers in the showroom isn’t enough to provoke a cardiac episode, a visit to the dealership’s service department might do the job.

That’s where a tire-kicking customer is likely to spot the sign announcing labor charges upward of $125 an hour, a rate typical in cities and at the low end for luxury brands.

Besides chest pains, the number might also elicit a gasp of realization: “That’s way more than I earn.”

It’s true that a mechanic wielding wrenches is not paid that hourly rate — the shop’s cash flow must cover sophisticated diagnostic tools and contribute its share toward the dealership’s prime real estate. But top-level technicians in the field can earn $100,000 a year after achieving master mechanic status and five years of experience, said Robert Paganini, president of the Mahwah, N.J., campus of Lincoln Technical Institute.

So, it would be logical to conclude, applicants must be banging on dealership doors for those jobs.

Not quite: It’s the dealerships and auto manufacturers banging on doors, eagerly seeking out candidates at job fairs, trade schools and events for veterans. The shortage of qualified technicians is so acute that a year ago, BMW of North America began its own recruiting program, making its pitch to students at postsecondary technical schools and career fairs. While that may be a common practice for multinational corporations, it’s unusual in that the job openings will be at independently owned BMW franchises.

The shortfall of automotive technicians is not new, but as vehicles have grown more computerized and vocational programs have disappeared from high schools, the situation has become more urgent. No longer is the career path a matter of looking over the shoulder of a patient mentor. Advancing in the profession demands digital skills — a diagnostician who can solve puzzles without physical clues, like an engine bearing that knocks or an axle shaft that vibrates.

John Fox, director of Fiat Chrysler’s Performance Institute, said that the automaker’s United States dealerships could absorb 5,000 technicians over the next two years, having hired 3,000 in the last two. Numbers of that scale give Mark Davis, automotive programs manager at Seminole State College in Sanford, Fla., confidence that his estimate of technician shortfalls — more than 25,000 at American dealerships over the coming five years — is actually quite conservative. Worse yet, there may not be enough training institutions in the country to keep up, Mr. Davis said.

It’s a situation that cannot be ignored. With competition for car buyers cutting into their profits, dealers’ service departments have grown into a vital income source. According to a 2016 report by the National Automobile Dealers Association, 266,000 technicians are employed to perform mechanical and body repairs. Last year, customers at dealerships in the United States spent $18.9 billion on labor charges in the service department. Warranty work, whose costs are picked up by the automakers, accounted for another $9.6 billion.