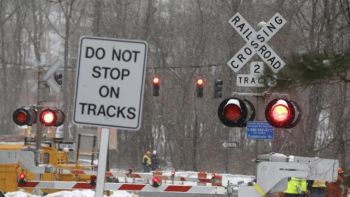 The drivers of an oversize truck and its escort vehicle had as long as 20 minutes to call an emergency number that could have stopped an Amtrak train that was bearing down on the North Carolina railroad crossing where the truck became stuck.

The emergency number was posted at the crossing and printed in materials both drivers should have possessed, and their training should have told them when to call it and where to find it.

The driver of the truck was attempting to cross a CSX track in Halifax, N.C., when it became stuck making a turn. Amtrak’s northbound Carolinian, carrying 212 passengers and eight crew members, hit the truck and derailed. Sixty-two people were treated for minor injuries.

Based on eyewitness accounts, the Federal Railroad Administration said that the driver had spent 15 to 20 minutes attempting to turn before the train approached. The agency also confirmed that an emergency number was posted at the crossing.

A call to that number would have alerted CSX to stop the approaching train.

The derailment was the third since the beginning of the year in which a train carrying passengers struck a vehicle and derailed. Though investigators will ultimately determine the cause in each case, the incidents highlight the need for better driver education and training on railroad-crossing safety.

“This can be used as an example to make the education effort even better in the future,” said David Robinson, acting state coordinator for Operation Lifesaver, a nonprofit volunteer rail-safety organization.

Knowing where to find the emergency number and when to call it is part of training and recommended practices for drivers of commercial vehicles, as well as the escort drivers accompanying them.

Trucking companies moving oversize loads aren’t required to plan for railroad crossings along their route if the route is approved by the state for such movements.

The Federal Motor Carrier Safety Administration distributes visor cards to trucking companies with railroad-crossing safety tips. The emergency phone numbers for all major U.S. railroads, including CSX and Amtrak, are printed on the card.

The agency recommends planning for railroad crossings in its best-practices manual for escort drivers. The manual also encourages escorts to “make advance contact with the railroad if in doubt that the load can safely negotiate the crossing.”

Railroad-crossing safety is the second chapter of North Carolina’s manual for escort vehicle drivers. It specifies that drivers perform a visual check to make sure the truck load can safely negotiate a crossing.

“If there is any doubt, do not cross,” the manual says. “Pull over and make alternate plans.”

Though railroad-crossing crashes are half what they were 20 years ago, 251 people were killed and 929 injured in 2,087 crossing crashes nationwide in 2013, the most recent year of complete federal statistics.

To see the original story go to McClatchy DC.

Mar 16, 2015connieshedron
Say the Word: Voice Systems can Reduce Some Types of DistractionARI’s Bob Graham to Speak at the 20th Annual Conference of Automotive Remarketing