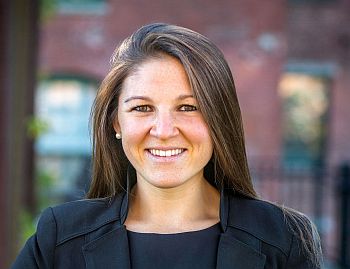 Merchants Fleet is pleased to announce VP of Marketing & Innovation Amanda E. Rogers was honored with a 2020 Outstanding Women in Business Award from NH Business Review.

The annual awards celebrate the successes and achievements of women who have had a lasting impact on New Hampshire’s business community as leaders and role models.

Rogers was selected for her track record as a young professional and executive who drives award-winning results. Since joining Merchants in January 2018, she led a successful corporate rebrand, a web launch, and a move to a new headquarters. She stood up the company’s first Innovation Department, a corporate strategic marketing pursuit team, and a Futures team. Her team also launched the company’s Fleet Summit, an event with over 400 attendees from the fleet industry including representatives from Ford, General Motors, and more.

“Diversity is a critical component of any company’s leadership team, and that includes diversity of age,” said CEO Brendan P. Keegan. “When I joined Merchants, I focused on building a leadership team that mirrored our employees in age, gender and race.  Amanda continuously adds creative thinking and tremendous value, and she is a great example of what young professionals can accomplish when they are given a seat at the table.”

Roughly a third of Merchants Fleet’s employees are Millennials (defined as those born between 1981 and 1997). The company cemented its long-standing commitment to do business in and attract skilled workers to New Hampshire by moving to an innovative, state-of-the-art 55,000 square foot facility in Hooksett, N.H., earlier this year – an effort that Rogers led. Merchants also has repeatedly won awards for its culture, including being named a Coolest Company for Young Professionals by Stay Work Play.

“This year’s Outstanding Women in Business come from different industries and walks of life, but share a strong sense of self, a success-driven work ethic and extraordinary accomplishments,” said Jeff Feingold, editor of NH Business Review. “We congratulate all of this year’s recipients, including Amanda, whose commitment, vision and talent make her a true leader in her field.”

All recipients were honored at an awards ceremony Thursday, February 13, at the Manchester Country Club in Bedford. Profiles of each recipient will be featured in an upcoming issue of NH Business Review.

Rogers serves as Vice President of Marketing & Innovation at Merchants Fleet, where she oversees strategic future initiatives and all marketing activity. She is an award-winning executive, recognized for innovation, leadership, and marketing prowess. Prior to joining Merchants, Amanda spent 5 years with velocityHUB as Partner, responsible for developing leaders through professional development programs across 15 diverse industries. She is the Co-Founder of The Victory Academy, a sports and education leadership training division of velocityHUB, where she served as a leadership coach to over 25,000 students and student-athletes at over 40 institutions. She received her Bachelor’s Degree in Business Administration from Boston University, where she also played Division 1 lacrosse for the Terriers. She lives in Portsmouth, New Hampshire.

Feb 21, 2020connieshedron
What's Your Word?AFLA Offers Benefits Throughout the Year