The Next Transportation Secretary Seems Pretty Down With Self-Driving Cars 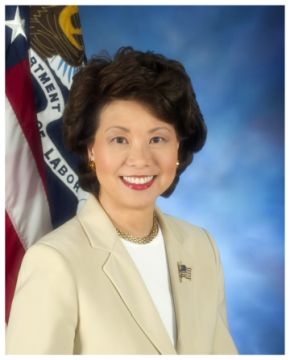 It is perhaps a stretch to call Elaine Chao, President-Elect Donald Trump’s nominee for secretary of transportation, “hip with it.”

The Kentucky resident today sat for her fourth Senate confirmation hearing, following stints at the Transportation and Labor departments starting in the mid-80s. Chao, who happens to be married to Senate Majority Leader Mitch McConnell, is the ur-Washington bureaucrat, a woman described by those on both sides of the aisle as a longtime, competent doer.

Not the sort of hoodie-wearing early adopter to embrace world-shaking visions of the future.

And yet, her performance this morning left autonomous vehicle advocates—who fancy themselves as sitting on the bleeding-edge—quietly cheering. “I think today was actually a really good indication that she’s going to keep moving in a positive direction,” says Jamie Boone, who oversees government affairs at the Consumer Technology Association.

In other words: If you’re working on getting—or simply hoping to see—autonomous vehicles on a road near you, expect calm waters ahead. During a three-hour hearing light on specifics and commitments, Chao signaled that she wants testing and experimentation to continue without much federal intervention.

While the advantages of new technologies like robocars and drones are clear, Chao said, “there are also concerns about how they will continue to develop. …. We need to do so in a way that will not dampen the basic creativity and innovation of our country.”  Shorter: Don’t let regulations get in the way of tech development. Later, she cautioned against a “patchwork” of state regulations, another priority for those pushing the technology.

The hands-off approach is a tidy continuation of the Obama administration’s policies, says Katie Thomson, a former DOT official who is now a partner at the law firm Morrison and Foerster. “Chao said almost exactly what [current] Secretary [Anthony] Foxx has been saying, which is, ‘The federal government has a role, but we need to strike a balance to make sure there’s safety while allowing innovation to continue,’” she says.

In September, Foxx’s department finally released a loose set of federal guidelines for self-driving vehicles. As Bryant Walker Smith, an expert on the legalities of robocars, noted at the time, the rules represented something of a deviation for Uncle Sam. Instead of demanding that tech companies and automakers take one specific approach to testing and implementation, the “15-Point Safety Administration” drafted by the National Highway Safety Administration set goals for operations, data sharing, and human-machine interfaces—but didn’t specify how anyone should get there. In fact, the guidelines aren’t even mandatory.