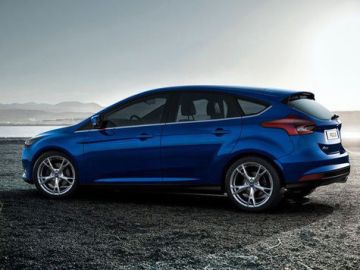 Anyone who has had to face driving on snowy roads this winter knows what can happen when you hit a patch of black ice, especially when you’re going into a corner or trying to stop.

Ford Motor Co. claims to be launching a new version of electronic stability control that not only intervenes once a car begins to spin, but which “can predict a spin before it even begins.“

“By recognizing scenarios that can lead to a potential loss of driver control before oversteer has developed, the enhanced transitional stability system is setting the recovery process in motion quicker than ever before – resulting in smoother, more refined control,” says David Messih, Brake Controls manager, Ford North America.

Since the late 1980s, automakers have been adding a procession of ever smarter brake intervention technologies, starting with ABS. Today, federal law requires all vehicles sold in the U.S. to be equipped with more advanced electronic stability control or ESC.

Such systems use a variety of sensors, primarily designed to measure wheel slip, steering wheel angle and yaw. If the digital controller detects a vehicle beginning to spin, or oversteer, it can then pulse the brakes on one or more of the wheels automatically in an attempt to bring it back under control.

The new Ford system looks for other possible clues that might be measured before a spin begins. In terms of time, the difference is modest, about 100 to 200 milliseconds, the makers notes, but that can be enough to prevent even more spins – and possible crashes – than conventional ESC.

The complex algorithm used for the system actually was already in use as part of Ford’s Roll Stability Control, another technology that is designed to prevent vehicles from rolling over.

Electronic stability control has been widely hailed as one of the most effective active safety systems ever developed. It has been a major factor in the sharp decline in U.S. motor vehicle fatalities over the past decade, according to Adrian Lund, president of the Insurance Institute for Highway Safety.

A recent IIHS study found that during a three year period from 2009 to 2012 an average 28 motorists were killed for every million registered vehicle years. That was down from 48 deaths in a study conducted three years earlier and reflects, at least to a significant part, the wider availability of stability control. A decade before, when the technology was rare, the death rate was 87.

“We’ve had a reduction of over half in the likelihood of dying in a single vehicle crash,” said Lund, in a recent interview with TheDetroitBureau.com, largely by preventing spin-outs.

Meanwhile, he noted, anti-roll technologies have reduced the number of single-vehicle SUV rollovers by 70 to 80%.

“I would fully expect to see a further improvement” in vehicle safety as more advanced active systems are added to vehicles, said Lund, who was interviewed prior to Ford’s announcement of the new stability control technology.

To see the original article, go to The Detroit Bureau.