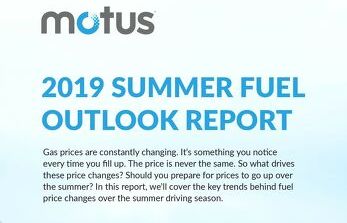 U.S. Appetite for Fuel Approaches Historic Levels; Americans to Travel a Record Number of Miles in the Months Ahead

Motus has released its 2019 Summer Fuel Outlook Report, which reveals key data related to fuel price fluctuations with a look towards how these changes will impact the summer driving season. One trend that stands out is that as employment and population grow, Americans are anticipated to drive a record number of miles in Q3. As such, U.S. highway travel is anticipated to increase 1.3% this summer.

The report also reveals information behind fuel price trends, including how costs are impacted by geopolitical tensions. For instance, fuel prices typically rise over the second quarter and level off in the summer months of the third quarter. However, thus far in 2019, there’s been a larger price spike at the start of the second quarter due to coordinated production cuts by OPEC+ nations. This is actively being offset by the fact that the U.S. has established itself as a top oil producer, having increased average weekly oil production by 11% in 2019.

“Taking a variety of factors into account, we expect the national average fuel price to fall between $2.90 – $3.15 for Q3 2019. We expect prices to peak in June during the beginning of the summer and unwind throughout July and August,” said Ken Robinson, market research analyst for Motus. “Price movement will depend heavily on whether OPEC+ countries agree to increase production when they meet at the end of June and how quickly they execute. Additionally, unexpected supply disruptions in unstable areas could also affect these predictions.”

The EIA forecasts U.S. motor gasoline consumption will average 9.54 million barrels per day this summer. That’s slightly more than last year and nearly the same as the record summer average set in 2017.

“It can be difficult to predict the cost of fuel when so many factors can affect prices. As Americans head towards record levels of fuel consumption, it is more important than ever to account for the true cost of fuel and other driving expenses when you have employees that drive for work,” said Craig Powell, CEO of Motus. “Motus is dedicated to helping employers address this challenge and ensure they’re accurately reimbursing their teams for mileage traveled for work in a fair and accurate manner, regardless of fluctuations in fuel price.”

Additional findings in the 2019 Summer Fuel Outlook Report include: