Managers of Work Truck Fleets: Is Renewable Diesel in Your Future? 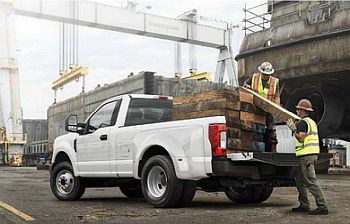 Unless you operate on the West Coast, you may not be aware of an environmental wonder fuel called “renewable diesel.” But if you have diesels in your work truck fleet and operate anywhere else in the U.S. or Canada, and particularly off road, someday it may be your fuel of choice, if there’s enough of it.

Right off the bat, it’s important to know that renewable diesel is not biodiesel. Both are made from animal fats or vegetable oils, via different processes that give them different chemical properties. The basic difference is that biodiesel retains the oxygen found in its source materials, while the process used to make renewable diesel removes the oxygen and infuses the fuel with hydrogen.

While a relatively simple difference, the results are dramatic: RD burns far more cleanly than any other type of diesel fuel, including ultra-low sulfur diesel (ULSD) and BD. A 2015 study by the California Environmental Protection Agency concluded that renewable diesel generates about 30% less particulate matter emissions, 5% less total hydrocarbons and 10% less nitrogen oxides than ULSD, the latter being even slightly less than biodiesel.

Renewable diesel offers fleet operators another advantage. Because it burns so cleanly, trucks’ particulate air filters clog far less frequently, saving downtime and money to clean the filers. For example, Gary Lentsch, fleet manager for the Eugene Water & Electric Board in Oregon, estimates that he saves around $5,000 a year from the 75 trucks he fuels with renewable diesel.

Finally, renewable diesel delivers another advantage over other environmentally friendly alternatives: it’s a “drop-in” fuel that can be used in any current diesel engine. Thus, it avoids the purchase of a new, higher-priced vehicle – say, one that has an electric engine – or a kit to convert truck engine to run on Compressed Natural Gas, which run up to $8,000 apiece.

It’s for these reasons that the fuel has become so popular in California, which has the strictest clean air standards in the country. In fact, California consumes about half of the approximately 275 million gallons of renewable diesel sold in the U.S., most of the rest of which is sold in Oregon and the state of Washington. The fuel has been adopted by dozens of county and municipal fleets, including San Francisco, Oakland, San Diego and Portland, Oregon.

But what about commercial fleets? It so happens that North America’s single biggest user of biodiesel is UPS. Back in 2015, the company entered into an agreement with Neste, the world’s largest renewable diesel supplier, to buy up to 46 million gallons of the fuel through 2018, with the aim of replacing 12 percent of the petroleum-based fuels used to power its U.S. fleet. The company uses it to fuel Class 4 through 8 vehicles, most of which are in California. So far, the company reports great success with its program, both on an environmental and economic basis, and would use more — if it could get it.

Michael Whitlatch, vice president of global energy and procurement at UPS, says one key to the company’s program is that “since RD is a drop-in high performance fuel, we can utilize scale to purchase in bulk for multiple operations. This provides consistent demand for the producers and helps keep the price competitive with diesel. And this points to obstacles to wider adoption of renewable diesel: price and availability.

Unsubsidized, renewable diesel retails for nearly 70 cents more a gallon than USLD. Through 2017, suppliers were eligible for a $1 per gallon U.S. federal tax credit, which made the fuel competitive. In addition, some states offer renewable diesel an exemption from excise or sales taxes. But increasing demand for the fuel – which constitutes just a small fraction of the diesel market – has raised the price, and not every fleet enjoys the same price break as UPS. Alia Khouri, director of fleet operations for the city of San Diego, says renewable diesel costs her fleet 4 percent more than petroleum-based diesel, which she says is an acceptable price for its benefits.

But in other cases, the price and scarce availability of renewable diesel around the rest of the country put it out of reach. When the city of Knoxville, Tennessee, tried to run a renewable diesel pilot program with a small batch of the fuel (7,500 gallons), it paid 83 percent more than the price it was paying for USLD. Similarly, New York City has been having trouble finding enough renewable diesel at a reasonable price to run its proposed pilot program for some 500 vehicles in four agencies, including its sanitation and fire departments.

The problem stems from the fact that there are just seven domestic producers of renewable diesel in the U.S, all of which are located west of the Mississippi River: California, Kansas, Louisiana, Missouri and Texas. Another supplier, Neste – one of UPS’s suppliers – is based in Finland and its refineries are located in Finland, the Netherlands and Singapore.

Advances in research may shrink both that expenses and time. Several major oil companies are working on creating biodiesel more cheaply and abundantly from algae, and a Texas company that designs and make catalysts says it has created a new process than can produce renewable diesel that can sell for $2.38 cents a gallon without subsidies, about 15 cents less than ULSD.

It’s going to take a long time for the world’s work truck fleet to achieve zero emissions. Renewable diesel might well be on your road ahead to getting there.