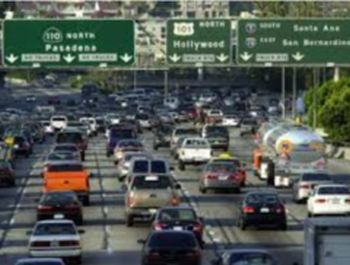 Los Angeles has, by far, the worst traffic problem in America, with some of the “nastiest gridlock” facing cities along the West Coast, according to navigation company Tom Tom. New York and a number of booming metro areas in the South are also facing major traffic problems, according to the Tom Tom Traffic Index.

But American commuters actually have it easy compared to their counterparts in many other parts of the world. Globally, Los Angeles ranked only tenth, according to the new study, far behind Mexico City, Bangkok and Istanbul which, Tom Tom reported, have the worst roadway congestion of any major cities around the globe.

Drivers in Mexico City can expect to spend an extra 219 hours a year stuck in traffic, the study indicated. Meanwhile, L.A. traffic means motorists waste about 164 hours, “almost a full week stuck in their cars,” said a summary of the new study.

And the situation appears to be worsening in many places as more cars crowd onto highways. During rush hour, Los Angeles drivers will nearly double the time needed to commute. But congestion is a problem all day, increasing daily drive times by 41%, up from 39% as recently as 2014.

San Francisco drivers can expect to spend 36% more time getting from Point A to Point B at any time of the day due to traffic, according to the study, with those travelers in New Yorker, Seattle and San Jose also having to add about a third more time than they might expect if roads were free-flowing.

In the U.S., six of the 10 cities with the worst traffic jams were along the West Coast, according to the fifth annual Tom Tom Traffic Index. But fast-growing cities in the South have been facing steadily worsening traffic conditions. That includes Atlanta, 13th on the list, Tampa, Orlando, Baton Rouge and Nashville, all in the Top 20.

On the flip side, cities with the best commutes were in the Midwest, and included Kansas City, Indianapolis, Omaha-Council Bluffs, Iowa, and Dayton, Ohio.

The report notes that, “Honolulu, Washington and Chicago…recorded a slight improvement in the overall traffic driving time from last year. But the leaders, Los Angeles, San Francisco and New York, each got worse.”

Tom Tom relied on 14 trillion points of data to calculate traffic conditions at various times and days in 295 cities in 38 countries on six continents.

The U.S. has nothing on Mexico City, where drivers can expect to spend 59% extra travel time stuck in traffic anytime during the day, according to Tom Tom, a figure that jumps to 103% during evening rush hour. The Mexican capital is followed by Bangkok, Istanbul, Rio de Janeiro and Moscow, the Russian capital having the dubious distinction of facing the worst traffic in Europe.

Ralf-Peter Schafer, a vice president at Tom Tom, suggested motorists might try several ways to speed up travel. “Dare to follow a new route suggested by your navigation system. (Or) consider other modes of travel – maybe the fastest way to get to work is by bike, on public transport, or even by foot.”