iPhone to Car — They Lied to Me 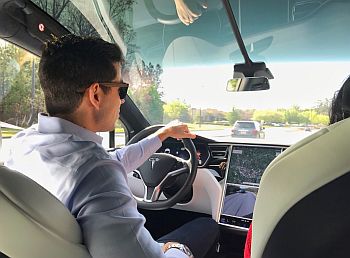 I want to start this blog with a short tale of my own UX (User Experience) superhero, the iPhone. The smart device that got everyone to do a “180″ and rethink UX in its essence. Is it time for the invincible superhero to grow up? Well, maybe, just maybe, some help from cars could be of use…

Imagine the scene as a young dad rushes into a Whole Foods store, on a sunny winter afternoon, in Georgia. In his hurry to grab this new high-end red blend and a gluten-free ham-and-swiss quiche, he has left his phone in his car – then, the two devices start to chat.

As the global market for smartphones has become besieged by devices of all shapes and sizes, a stressed post-pubescent iPhone talks with its older mobile device cousin, the car. They begin to discuss the challenges of reaching adulthood (yes – our automobiles are indeed centennial devices that are mobile… they come with wheels).

Much like a frightened grown-up, the iPhone and its family of similar gadgets are facing a new stage in their lives. Almost everyone has one in their hands, and they don’t switch them as frequently as they once did before. But irreplaceability is still the case, isn’t it? We can’t substitute our smartphones because there’s nothing to change for. Smart devices need to believe that life doesn’t get dull when you get more responsibilities and different expectations.

Last quarter, when Apple warned of cuts in revenue projection because of surprisingly sluggish sales of iPhones, mortals felt like their coronary arteries were getting blocked by an 18-wheeler. Suddenly, people had difficulty breathing. The news of declining sales sent shock waves to other players in the industry, like Samsung for example, and even usual supply chain comrades. But is the most successful device maker failing, or is it going through a life transition – are these devices just reaching maturity?

Humans around the world have chosen smartphones as their most inseparable piece of tech with about 4 billion of all 5.5 billion adults on earth having one (or two, or many) in their pockets. Jaw-breaking figures are often published for smart devices in every geography, like how many apps are downloaded every day or time spent on social media through these platforms. The point is: these devices are everywhere to be seen. People around the world hold more than 14.2 billion mobile devices according to market researcher, Gartner. From streaming, banking, gaming, chatting, etc… men, women, and children found meaning and applicability in carrying these things.

What would my “digital persona” say about me?

All previous UX boundaries have been broken by the smartphone ecosystem. These advances have played a significant role in how the [older] auto industry has found inspiration to ‘fuel-inject’ the passion back into their developers and designers to deliver unique driver and passenger experiences in cabins. The automotive industry is older than a century. Fleets of all kinds have been living in developed markets for a long stretch, where saturation is as common as long replacement cycles. In its most basic definition, market saturation is the state that emerges when the volume of a product or service has been maximized in a marketplace.

When it comes to in-vehicle UX, part of the OEM play here relies on building “digital personas” for drivers and occupants so that user’s preferences are captured, dissected and insights, then, provided. All the data gathered and the mining of analytics through ever-more-complex algorithms is aimed at connecting operators with their vehicles in more meaningful ways.

Substantial investments by automakers are flowing into designing mechanisms to allow drivers to engage with their cars (and be engaged) in touchless conversations with voice-enabled virtual assistants. By doing so, the hope is buyers will factor in the switching costs when considering another automotive brand. Buyer: “I am kind of torn…this car knows me so well, and it took a while to get here… I will probably stick with my brand.”

Having learned much from decades of genuine development in mobile tech, OEMs have been inspired by smartphones to build and/or acquire new technology to deliver on the promise to make drivers’ and passengers’ daily routines more meaningful. The challenge has been how to adapt and adopt the schizophrenic one-year consumer electronics change cycle (let’s call it “CES ready.” Here we go, Vegas!) without giving up much of their heavy-labor margins to the electronics industry.

“Cars” have always looked up to the “iPhone” (and its colossal universe of creative think designers, marketers and developers) to mimic what is now labeled as “minimum user expectation.” If you have a smartphone – and I am sure you do – and have taken an Uber before – you know what clean and compelling user experience is. Consciously or unconsciously, we demand superior user experience – frictionless, practical and easy. What is now regarded as the expected level of features has carried itself deeply onto how we choose our new vehicle purchases, too.

But can the “iPhone” get inspiration from a mature industry to get the depth needed and find meaning in a post-market congestion? As per BayStreet Research, iPhones were being replaced on average after two years in 2015, but that period has jumped to roughly three years now and is anticipated to increase. With increasing water resistance and stronger glass for its screens, smartphones are more resilient than they used to be, so that adds to keeping the device longer, too. The parallel with the auto industry here is: the replacement cycles for smartphones have been lengthening as brand new models offer only minimal changes and improvements. This is logical when thinking about vehicle purchase cycles.

The Economist said the smartphone market slowdown doesn’t symbolize disenchantment, “quite the contrary…After a decade of rapid adoption, there is much less scope to sell handsets to first-time buyers as so few of them are left.”

iPhone – “People are keeping me longer.”
Car – “That’s a good sign, bud.”
iPhone – “I thought I was irreplaceable, and they will keep wanting me.”
Car – “Exactly… – I said that before.”

What can the iPhone learn from cars?

A large part of an OEM’s success comes from its vehicle’s trade-in value. Removing shortages from the equation, the highest resale value usually means a high perceived value for the brand. It depends on how desirable the vehicle is on the used car market. Automakers understand the importance of the second-hand market because the market can only take so many new vehicles a year (around 16 million in the United States alone). With that, more mature thoughts involve warranty services, performance, reputation and adaptability with green technologies such as over-the-air updates.

So, what is next for the “iPhone” and its alike gadgets? Will it consider how trade-in affects its future resolution? What can it learn from its (not so) distant mobile cousin? Will there be a time when the used market for iPhones will behave like the automotive sector? If it’s in excellent condition and has a clean history and few owners, is it more likely to be sold on the dealer’s used car lot for a good profit?

As executive vice president of transformation at LeasePlan USA, Smolka is leading the strategy to drive modernization and innovation across the U.S. subsidiary to deliver what’s next for fleet, driver mobility, and connected vehicles. Smolka’s career has consistently revolved around the user experience and digital transformation, developing technologies and leveraging the power of data to create value. Felipe is a proven global leader poised to transform the fleet industry. Smolka holds an MBA from Emory Goizueta Business School.

Feb 21, 2019Janice
Autonomous Cars Might Kill Auto Insurance As We Know ItShifting the Conversation Towards Mobility