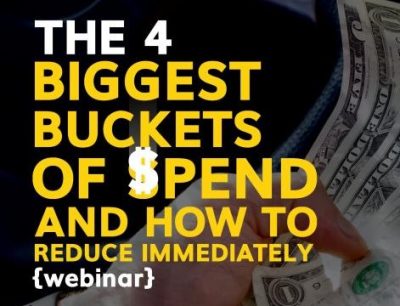 It should come as no surprise that reducing expenses is the number one goal for fleets. At least that is what Donlen, one of the biggest fleet management companies in North America, found when it surveyed several hundred of its customers last year. Saving money was a goal of nearly 50 percent of them, more than double the next-most popular goal, which was managing cash flow.

The trick, of course, is how to do it. For Donlen, fleets can realize the richest savings by focusing on their four largest expense categories. In descending order, Donlen identifies them as depreciation, fuel, maintenance and accidents. Together, they accounted for 89 percent of the surveyed fleets’ spending in 2019, with depreciation at 36 percent and fuel at 28 percent taking the lion’s share of those, followed by maintenance (14 percent) and accidents (11 percent).

Donlen shared its advice on how to maximize savings in a recent webinar entitled, “The Four Biggest Buckets of Spend and How to Reduce Them Immediately.” Speakers for the hour-long program were Carlos Oropeza, Donlen’s director of marketing, and John Wuich, vice president for Donlen’s strategic consulting services. Here is a summary of their recommendations.

Depreciation: Minimize Cost, Maximize Resale Value
Both for fleets that purchase or lease their vehicles, the key to minimizing depreciation is to develop a coordinated strategy that, at the time of acquisition, takes into account both a vehicle’s cost and its projected resale value. It may be counterintuitive, but they pointed out that a vehicle with a higher price can be a smarter move if the features that make it more expensive to acquire also more make it worth more at resale.

The pair cited a hypothetical example of two hybrids, one labeled Hybrid A, with a net financed cost of $26,206, versus Hybrid B with a net cost of $1,300 less at $24,920 for B. Over four years, at the same annual mileage, the vehicles were projected to generate virtually the same lease fees and maintenance costs. But when it was time to cycle them out of the fleet, Hybrid A had a projected remarketing value of $11,725, some $1,400 more than Hybrid B ($10,375). Net effective depreciation, which is vehicle acquisition cost less vehicle sale price, now favors Hybrid A. Additionally, Hybrid A with a fuel economy of 50 MPG versus B’s 40 projects to save almost $1,200 in fuel spend over Hybrid B.

Oropeza and Wuich noted that fleets can’t just focus on the highest projected resale value to make the right decision. They also have to take full advantage of ways to minimize vehicles’ acquisition cost and to obtain the highest resale price for vehicles being retired from the fleet. On the acquisition side, these include ordering direct from manufacturers, placing larger orders with them by sourcing from fewer OEMs, and asking their fleet management companies to share the OEM discounts they receive from representing many client fleets. On the remarketing side, it’s a matter of working with resale agents who consistently achieve higher prices.

Saving on Fuel Spending
There are four ways that Donlen recommends fleets can save on fuel expense:
• Reducing miles driven by optimizing driver routes and limiting personal use of fleet vehicles.
• Using vehicles with better fuel economy, including more efficient fossil fuel-powered vehicles and hybrids.
• Managing drivers to reduce both the speeds at which they drive and the time they spend with their engines idling.
• Managing the average price per gallon that drivers pay for fuel by using smart phone apps that direct them to gas stations that offer a lower price.

Mr. Wuich illustrated the potential for the latter with a study of one of Donlen’s client fleets that bought nearly 487,000 gallons of fuel in one city in the fourth quarter of 2019. Purchases were made at nine different chains where the prices ranged from $2.54 to $2.73 per gallon, at a volume-weighted average purchase price of $2.67.

That average, though, was boosted by the fact that 71,000 gallons – the largest single fleet purchase — were bought at stations with the highest price. Had the fleet used available technology to direct drivers to buy merely at the average price, instead of the lowest, it would have saved more than $4,200 in that three-month period, or $17,000 a year in that one city alone.

Saving on Routine Repairs and Maintenance
Mr. Wuich said that ensuring that drivers comply with scheduled routine maintenance is the most effective way that fleets can save money on repair expenses in the long run. Beyond that, though, fleets can save by managing and monitoring every maintenance job before they’re started so only necessary repairs are done and that they’re done only in fleet-approved network shops at negotiated prices for parts and labor.

The Donlen speakers said that by monitoring and managing repair estimates saved customers about 12%, and that completing repairs within network saved almost 10 percent.

As an example, data was shared for a customer fleet that averaged about 43 percent of repairs being completed in network. The missed opportunity of network pricing was illustrated by higher out-of-network prices on such repairs ranging from brake inspections and battery recharging to tire repairs and tire pressure monitoring systems. That missed opportunity equated to more than $64,000 over the course of a year.

Saving on the Cost of Collisions
Mr. Wuich said that managing driver behavior more closely is a key to achieving significant reductions fleets spend as a result of highway collisions. He demonstrated that by citing a year-long case study of a client fleet of some 3,000 vehicles that, while generally well-managed, had a higher accident rate than its industry benchmark.

At the end of 2018, the fleet installed telematics technology in its vehicles that tracked, among other things, how often drivers were speeding. After one year, the fleet’s speeding events fell by 35 percent, its accident rate dropped by 13 percent, and the average severity of its at-fault collisions declined by 12 percent. Combined with simultaneous reductions in idling and miles driven, installing telematics generated net savings over the expense of the system of $1.1 million.

Other Ways to Reduce Expenses
Installing telematics is only one way that Wuich and Oporeza cited that can save fleets money in several areas of expense at one time. Having a fleet driver policy that has been updated within the last three years and has been acknowledged by drivers may save as much $880 a year for every vehicle that is driven 20,000 miles a year, according to one study of sedan fleets. Holding drivers accountable for adhering to such policies brings a number of benefits, including more accurate odometer reporting, greater compliance with scheduled maintenance and use of network repair shops, better fuel economy and lower operating costs per mile.

Another strategy they cited is replacing vehicles before their originally scheduled retirement date. Making the right call requires fleets to analyze carefully each type of vehicle’s total depreciation by mileage, its fuel spend and cost of repairs, all of which accelerate over time and distance, as well as monitoring changing price trends in the used vehicle market.

Mr. Wuich cited an example of a fleet’s two-year experience with light-duty, half-ton trucks. Donlen found that the total cost of operating this vehicle segment bottomed out between 120,000 and 130,000 miles. Donlen’s analysis projected that retiring those vehicles then instead of at 170,000 miles and 70 months of ownership would save about 2 cents per mile, or some $3,400 over the life of each truck. Further, Donlen analysis of used truck prices revealed that the fleet could save even more by retiring the vehicles at 70,000 miles or after just 40 months of ownership.