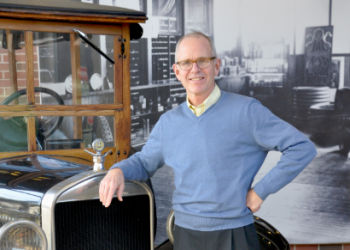 The Holman Automotive Group, parent company of ARI, announced that Steve Holman has joined the company as Manager, Community Affairs to help lead the organization’s various community service and charitable initiatives. Steve Holman joins his father, Joseph Holman, Chairman of Holman Automotive Group, and sister, Mindy Holman, President and CEO, in the family business that was founded by his grandfather, Steward Holman, more than 90 years ago.

“I am extremely proud to welcome my son to our company in an active management role. He has served as a member of the Board of Directors since 1997,”said Joseph Holman, Chairman, Holman Automotive Group. “Philanthropy and community service have been a core part of our corporate philosophy since my father founded the company in 1924 and I believe Steve will flourish in this role which is incredibly important to who we are as an organization.”

In his new position as Manager, Community Affairs, Steve Holman will play a key role in all aspects of the Holman Automotive Group’s charitable initiatives. In addition to serving as the face of the Holman Automotive Group throughout the community, Steve will be responsible for overseeing the company’s grant program which provides more than $1 million in funds to more than 300 organizations annually. During his short time in his new role, Steve has already established a new committee to review grant requests while also transitioning to an online application process.

“I am delighted that my brother has joined the family business and is taking on the vital role of managing our community affairs,” said Mindy Holman, President & CEO, Holman Automotive Group. “It is great to have Steve in this position, a family member who will devote 100 percent of his time to our charitable efforts. His unwavering dedication and keen intellect along with his true passion for helping others will be the driving force behind our community outreach efforts for many years to come.”

Prior to joining the Holman Automotive Group, Steve Holman spent more than 30 years running his own custom furniture business based in Vermont. Before founding his furniture business, Steve helped to build low-income housing in Florida, Colorado and California with the American Friends Service Committee.

A graduate of Davidson College, Steve is married to his wife of 29 years, artist Georgine MacGarvey; the couple has two sons, Jeff and Brett.