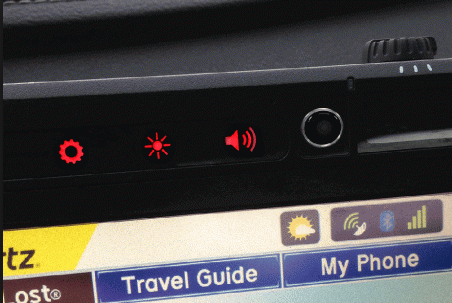 This week I got an angry email from a friend who had just rented a car from Hertz: “Did you know Hertz is putting cameras in rental cars!? This is bulls**t. I wonder if it says they can tape me in my Hertz contract.” He sent along this photo of a camera peeping at him from out of his “NeverLost,” a navigational device that the company has started putting in many of its cars.

“I even felt weird about singing in the car by myself,” he said. A Googling expedition revealed that my friend was not the first person driven to disturbance by the in-car surveillance system. A Yelp user was revved up about it. Disgruntled renters on travel forums like MilePoint and FlyerTalk want Hertz to put the brakes on “spy cams.” A loyal Hertz customer who rented a car in Chicago said it might make them never want to rent with Hertz again:

The system can’t be turned off from what I could tell. Further investigation revealed that the camera can see the entire inside of the car. I know rental car companies have been tracking the speed and movements of their vehicles for years but putting a camera inside the cabin of the vehicle is taking their need for information a little TOO FAR. I find this to be completely UNACCEPTABLE. In fact, if I get another car from Hertz with a camera in it, I will move our business from Hertz completely.

Hertz has offered the NeverLost navigational device for years, but it only added the built-in camera feature (which includes audio and video) to its latest version of the device — NeverLost 6 — in mid-2014. “Approximately a quarter of our vehicles across the country have a NeverLost unit and slightly more than half of those vehicles have the NeverLost 6 model installed,” Hertz spokesperson Evelin Imperatrice said by email. In other words, one in 8 Hertz cars has a camera inside — but Imperatrice says that, for now, they are inactive. “We do not have adequate bandwidth capabilities to the car to support streaming video at this time,” she said.

So why is Hertz creeping out customers with cameras it’s not using? “Hertz added the camera as a feature of the NeverLost 6 in the event it was decided, in the future, to activate live agent connectivity to customers by video. In that plan the customer would have needed to turn on the camera by pushing a button (while stationary),” Imperatrice explained. “The camera feature has not been launched, cannot be operated and we have no current plans to do so.”

The device is often included as a free perk for Hertz’s “Gold” members, meaning Hertz is taking the risk of creeping out its most loyal customers with the camera eye in the car.