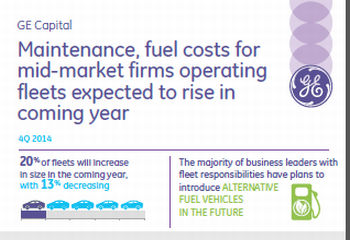 GE Capital has just released a national survey of 409 executives at middle market companies (ranging from $10 million – <$1 billion in sales) who have responsibility for their company’s vehicle fleets. The survey results provide an outlook on a variety of important economic, industry, and business-level issues, including growth expectations and financing needs.

Notably, the survey found that one in five fleets plans on increasing in size next year, with just 13 planning to decrease. Additional findings from the survey include:

• Only 4% of companies surveyed currently have alternative fuel vehicles in their fleet, but more than (55%) plan on adding AFVs in the coming years (up from 48% in Spring 2014). Diesel trucks are the most sought-after AFV addition for these companies (23% of fleets plan on adding), followed by plug-in electrics (14%), CNG (10%), and diesel cars (10%).

• 60% of fleets expect overall fleet costs to increase in the next 12 months; this is up from 51 percent in Spring 2014. Fuel and maintenance costs/vehicle downtime were the top causes of increased costs (particularly the upkeep of older vehicles and unscheduled maintenance/repairs).