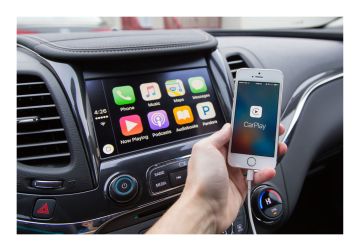 Ford Motor Co. will offer Apple CarPlay and Android Auto smartphone connectivity on its full lineup of 2017 vehicles, marking the fastest rollout of the technology so far by an automaker in the U.S.

Competitors have been introducing the popular features a few nameplates at a time over several years, but Ford, which offered no 2016 models with Apple or Android integration, is doing it all at once.

By the end of this year, all Ford and Lincoln vehicles will have the features built into Sync 3, which is replacing the sometimes-balky MyFord Touch system.

“We developed one platform — Sync 3 — and have been able to quickly offer the technology across our lineup,” Chuck Gray, Ford’s global director of electrical and electronic systems engineering, said in a statement. “Customers considering a new vehicle can now choose any 2017 model year Ford car, SUV, light truck or electrified vehicle with SYNC 3 and be able to access their favorite apps.”

The industry’s adoption of Apple CarPlay and Android Auto, which together cover more than 98 percent of the U.S. smartphone market, since their introduction in 2014 has been slower than anticipated, with some automakers falling behind their announced timelines. In many cases, the features are being added as part of a vehicle’s redesign or freshening, in contrast to Ford’s all-at-once approach.

Today’s announcement means Ford will have the technology in more nameplates than any competitor except General Motors, according to Apple Inc.’s website, which lists more than 120 compatible U.S. models. (That’s about one-third of all new-vehicle nameplates.) Apple says CarPlay is on 32 GM nameplates, including derivatives such as coupes and convertibles, and 22 from Ford Motor.

The software allows drivers to access many apps and other functions on their smartphone through the vehicle’s touch screen and voice controls.

“Ford is not taking the traditional approach of introducing Apple CarPlay and Google Android Auto on a few piecemeal models or as an expensive option on luxury vehicles only,” Hannah said. “The guesswork for consumers is over — if you buy any 2017 Ford vehicle with SYNC 3, you drive off the lot with both of these innovative technologies ready to go.”

Apple and Google Inc., which developed Android, say their in-car systems are designed to reduce distraction and create a seamless, nearly identical experience across all vehicles. Still, safety advocates have raised concerns about the features taking drivers’ attention away from the road.

Consumer Reports, in its July issue, praised Apple CarPlay and Android Auto for offering easier-to-use navigation apps and more frequently updated maps than automakers’ built-in systems but said the music player can be cumbersome to operate in some vehicles.

Jul 25, 2016connieshedron
How $600 In Auto Safety Features Could Save Up To $202 Billion In Crash CostsJonathan Matus: A Simple, Accurate Way to Monitor and Coach Driver Behavior