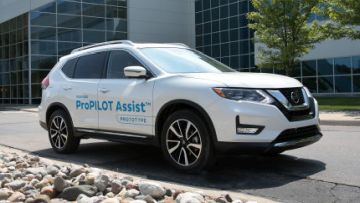 Like parents helping their child learn to walk, automakers are trying to teach their cars how to drive on their own.

And Nissan will take a big step closer to that goal later this year when an all-new version of the Leaf battery-electric vehicle comes to market.

The 2018 Nissan Leaf will see its range roughly doubled, the automaker signaling it will be able to deliver around 200 miles per charge. It also will feature a number of new technologies, including the e-Pedal system announced earlier this week, as well as something it has dubbed ProPilot Assist.

Nissan Chairman Carlos Ghosn has promised that the company will have its first fully autonomous car on the market by around 2020. But before then, Nissan plans to roll out a series of increasingly sophisticated, semi-autonomous driver assistance systems. ProPilot Assist is the latest. And we jumped at the chance to spend some time checking it out.

The term, ProPilot, might suggest that you’d be able to flip a switch and leave the driving to the new technology. But the telling part of the system is the word, “Assist.” In a presentation at the Nissan Technical Center in suburban Detroit, the automaker stressed that it’s a “building block.”

Read more of the original article at The Detroit Bureau.