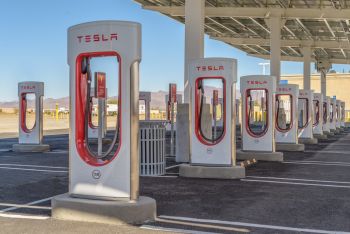 Elon Musk revealed via Twitter on Tuesday that the company will allow other electric car makers to use its charging stations later this year. Currently, the company’s Superchargers are only compatible with Tesla’s vehicles. Drivers of electric cars face the limitation of having to recharge approximately every 250 miles. Tesla has a vast network of chargers, with about 25,000 spread across the U.S.

Musk has been hinting at the company’s intentions for a while now. Back in 2014, he said he’d be willing to share the designs of the Superchargers in an effort to create a standard that could be used for all electric vehicles. Four years later, he expanded on that idea, saying the chargers were never meant to be a “walled garden,” according to TechCrunch.

“We’re happy to support other auto makers and let them use our Supercharger stations,” he said at the time. “They would just need to pay the share of the cost proportionate to their vehicle usage.”

Jul 22, 2021connieshedron
A Holistic View of the DriverThe Hidden Flaw is Now Playing