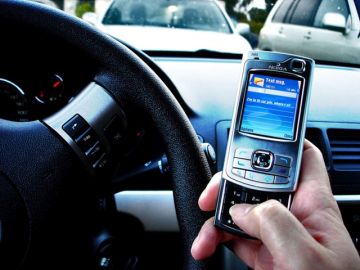 The problem has gotten so big that highways across the country now regularly warn drivers “Don’t text and drive.” And 46 states and the District of Columbia have laws banning texting and driving

But the issue isn’t just talking and texting anymore. Drivers are on Snapchat, Facebook, Instagram, Twitter, Google Maps, Spotify, YouTube and now “Pokemon Go,” the video game that has captured the world’s attention and has become the latest concern for distracted-driving advocates.

Recently, a man was accused of crashing his vehicle into a parked police car in Baltimore while playing “Pokemon Go.” In Napa, a teenage driver who may have been playing the popular video game ran her truck into a power pole.

Jennifer Smith, a mother of two and founder of the advocacy group StopDistractions.org, lost her mother in a crash nearly eight years ago when a 20-year-old who was talking on the phone drove through a stoplight. Since then, she has devoted her life to helping other families that have become victims of distracted driving.

As I’m talking to new families, more and more of them are telling me, ‘It’s Snapchat,’ ” said Smith, whose daughters were 1 and 13 when their grandmother was killed in Oklahoma City. “It’s Snapchat today, but then what is it tomorrow? You know, we’ve got the ‘Pokemon Go’ coming, and then it’s the next thing.”

Smith, who works full-time supporting families, lobbying for legislation and planning public awareness events, said people need to really focus on what’s important. “Social networking while driving is not necessary and should not be done by anyone, in any way, who’s driving. Period. And somehow we’ve got to make the whole country understand that.”

Judging by the results of a recent survey, we have a long way to go in getting that message out.

Nearly 70% of teens say they use apps while driving, according to a just-released survey of 2,500 high school-age children across the country. When the teens were asked to rank the behaviors they consider the most distracting or dangerous for a teen driver, 29% said driving under the influence of alcohol and 25% said writing or sending a text message. Only 6% said actively looking at or posting to social media is the most distracting or dangerous behavior behind the wheel for a teen driver, according to the survey by Liberty Mutual Insurance and Students Against Destructive Decisions (SADD).

In another survey, this one sponsored by the National Safety Council and focusing on 2,400 drivers of all ages, 74% said they would use Facebook while driving, and 37% said they would use Twitter while behind the wheel, with YouTube (35%) and Instagram (33%) close behind.

“It’s a slippery slope,” said Deborah Hersman, president and chief executive officer for the National Safety Council. “I would say most people see this line as a fairly blurry one and not a bright line.”

Read more of the original article at CNN.com.