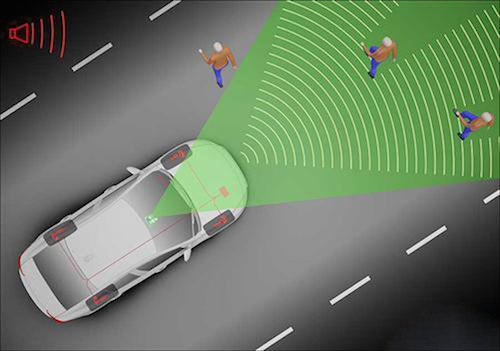 The Holy Grail of traffic safety is that someday self-driving vehicles will make traffic accidents a thing of the past. But as increments of that technology are introduced, drivers must be thoroughly trained in their limitations or else run the risk of depending on them for more than the equipment can deliver and of being involved in crashes they thought couldn’t happen.

Case in point: a senior vice president at the Insurance Institute for Highway Safety (IIHS) warned the audience at a global symposium on automated vehicles in Princeton, New Jersey, last week that the currently most successful type of crash avoidance system can’t prevent all kinds of crashes.

Kim Hazelbaker, who works both for IIHS and its related Highway Data Loss Institute (HDLI), said that in the organizations’ testing automated emergency braking (AEB) has been found to offer no protection at all against collisions with pedestrians who are walking in the same direction as the vehicle is traveling.  When asked if the forward crash avoidance system utterly failed the test, he said, “Yes.”

Hazelbaker also said that the system offers little protection against hitting pedestrians while a vehicle is turning in an intersection, or when pedestrians are crossing the roadway from the driver’s left. “The issue is that the systems don’t have enough time to react to the presence of the pedestrian,” he said.

IIHS conducts tests on forward crash avoidance systems at 12 and 25 miles per hour, the speed at which most forward collisions occur, Hazelbaker said. In practice, the HDLI I has found that AEB systems reduce front-into-rear crashes by up to 50 percent.  Unlike systems that only issue a warning to the driver when it senses an obstacle ahead, AEB systems apply the brakes even without a response by the driver.

In addition to limited protection against pedestrians, Hazelbaker said that AEB systems also offer considerably reduced protection in bad weather, including rain, snow and ice.  Although the vehicles that IIHS tested hit roadway obstacles at a reduced speed, videos he played for the audience showed that not a single one avoided a collision altogether.

Some 22 automobile manufacturers have pledged to make AEB systems standard equipment by their 2022 model year, but Toyota recently announced that it will make them available as standard equipment in 2018.  Hazelbaker said that other carmakers may soon follow Toyota’s lead.

The test results underscore the importance that fleets who adopt the equipment make sure they educate their drivers on the limitations of AEB technology.  Hazelbaker and others at the symposium offered assurances that improvements in AEB systems will continue to be made and that the future of relatively accident-free vehicles remains promising.

Fleet managers take note: none of them denied, however, that as vehicles progress through the various levels of driver assistance toward total autonomy, drivers will need to remain alert and fully aware of the limits of all new safety equipment.

May 22, 2017Janice
Maximizing Efficiency for Global FleetsSelf-Driving Car Technology: When Will the Robots hit the Road?