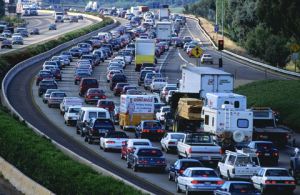 One of summer’s greatest joys is the reduced volume of freeway traffic during morning and evening rush hours.

With Labor Day looming, the congestion will amp up and for at least some of us, so will tempers. From exasperation to frustration to full-blown road rage, emotions run high behind the wheel.

We’re territorial, we’re stressed out and we’re in no mood for dithering and delays.

According to the 2014 AutoVantage “In the Driver’s Seat Road Rage Survey,” drivers actually report experiencing fewer unsafe motoring maneuvers compared to the responses in the roadside assistance firm’s 2009 survey on the same topic.

Survey results show that horn honking, cursing and fist-waving all are up over 2009. Seems like we’re all still pretty angry behind the wheel.

Detroit, in fact, improved nine spots on the courtesy ranking, moving from the third worst to 12th worst — a “dramatic improvement” as AutoVantage noted.

Multiple factors affect our attitudes en route:
• Crowded roads
• Aging infrastructure that leads to either pothole-ridden pavement or long construction zones
• Work-life stress
• Drivers who lock up the left lane by driving 61 mph abreast of a speed-limited semi-truck
• Non-stop chatterers who merrily tool along, out of step with prevailing traffic patterns
• GPS bots who change lane without applying common sense to the timing of lane changes, turns and braking.

“There are a number of people whose skills are just not that good,” said Steve Albrecht, a California workplace violence and anger management expert. “And they don’t realize the impact they are having on others.”

And they’re unlikely to realize the error of their ways no matter how many times they’re honked at, cursed or on the receiving end of angry gestures, he said.

“You can’t control other people,” he said. “They are not targeting you personally, so stop caring about what everybody else is doing. And if you’re still talking about those bad drivers by lunchtime, you have a problem. You’ve let it ruin your day, and the other driver has won.”

“Get there safe and get there happy — that, after all, is your goal,” he said.