What to Do If Your Car Is Caught in a Flood 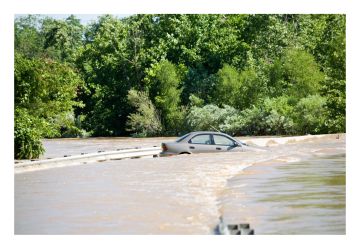 Floods are the most common and widespread of all natural disasters, according to the National Oceanic and Atmospheric Administration.

Because of their speed and unpredictability, flash floods are the most dangerous kind — especially for motorists.

The single worst decision you can make in a flash flood is driving your vehicle into floodwaters of unknown depth,”  The Weather Channel warns.

“It’s easy to misjudge the depth of floodwater, particularly at night.  “Flash floods occur when excessive water fills normally dry creeks or river beds along with currently flowing creeks and rivers, causing rapid rises of water in a short amount of time,” NOAA states on its website. “They can happen with little or no warning.”

According to the Federal Emergency Management Agency, just 6 inches of water will reach the bottom of most passenger vehicles and cause of loss of control and steering, while 1 foot of water can cause many vehicles to float away, and 2 feet is enough to sweep away most vehicles — even SUVs and pickup trucks.

On  average, 75 people were killed by flash floods annually between 2004 and 2013, and between 1995 and 2010 two-thirds of flash-flood fatalities occurred in vehicles, according to The Weather Channel.

In June, three motorists were swept away by flash flooding near Comfort, Texas, and at least two were confirmed dead shortly after. Two weeks ago, USA Today reported, a 1-in-1,000-year rain event in Ellicott City, Md., unleashed devastating flash floods that killed two people and carried away cars, resulting in a harrowing rescue of a trapped motorist.

Just this past weekend, heavy rains caused disastrous flooding across southern Louisiana, resulting in the deaths of both a 54-year-old man whose car was submerged after a highway collapse and a 30-year-old woman who drowned after the vehicle she was traveling in with her mother and husband was swept away by rushing waters.

Read more of the original article for the Do’s and Don’t in Cars.com.

Heed the following do’s and don’ts of what to do if you find yourself trapped in your car in fast-rising water:

• Stay calm. You’ll need your wits about you.
• Turn on your headlights and hazard lights. This will make it easier for emergency personnel to see you.
• Unbuckle your seat belt.
• Unlock your door.
• Take and outer clothing off.
• Lower your window slowly. Most electric windows should work unless the car is completely submerged in water.
• If you can lower the windows, climb out. Get to high ground and call 911.
• If the windows will not open, you’ll have to use a door to get out. But you won’t be able to open a door until the water pressure is equalized between the outside and the inside of the car. • This means you’ll have to wait for water to enter the car and fill up to about your neck level (this sounds terrifying, but this is the only way the doors will open).
•Once the doors are open, swim to safety and call 911

• Do not panic.
• Do not use your energy trying to open the doors because water pressure will keep them from budging (wait for the pressure to equalize).
• Do not try to save your possessions.
•Do not try to break windows to get out. If water pressure has not equalized, glass will explode inward toward you or other occupants.
• Once out, do not stay with your car. Get to high ground.
•Do not stand on the roof of your car. If your car is swept away, you’ll be carried away with it. You could also fall and injure yourself if the car shifts abruptly.
•Do not return to your car if you think the water level is going down. Water levels could rise without warning. Allow emergency personnel to tow your vehicle to a safe place.