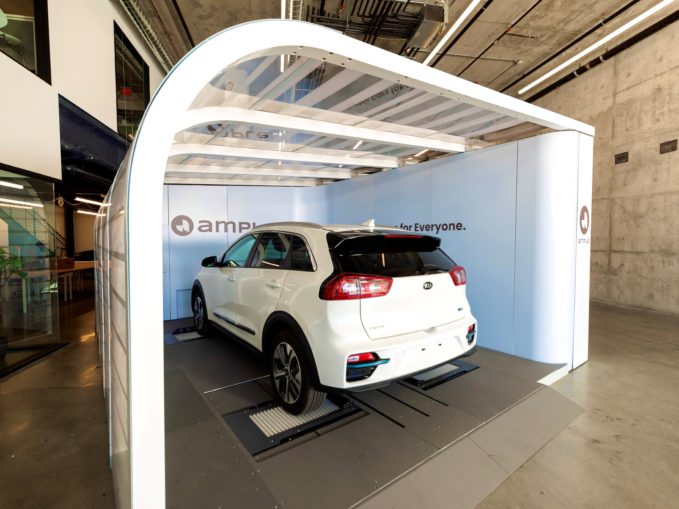 Ample, a San Francisco start-up, plans to capture a large share of the fleet market for electric vehicles using a recharging method as old as electric vehicles themselves: battery swapping. Early in the 20th century, electric vehicles were the top sellers, Garages and electric utilities often swapped batteries instead of recharging them. But then, ICE-powered cars began to dominate. By the late 1920s, electrics had all but disappeared.

Ample says that it can change out a battery in a robotized swap unit within 10 minutes, and it will soon reduce turnaround to five minutes. That compares favorably to a Tesla supercharger, which can take up to 45 minutes for an 80% charge. Heat build-up can harm the battery during supercharging, so higher level charging is not recommended. Most electric owners charge their cars overnight at home by merely topping them off daily. That won’t work for long trips, nor when large numbers of BEVs are sold.

After all, not everyone has a garage or even a handy extension cord, and charging access is still limited in garages, shopping centers, or even integrated into parking meters. New York City plans to install its first 100 units in October.

Could swapping be the solution or even part of it? Recently, Ample has announced that it will partner with Eneos, Japan’s largest oil company, to build a pilot project to test a swap center. The venture arm of Royal Dutch Shell led a $31 million investment in 2018. It included  Respol, the Spanish national oil company.  In China, Nio, a leading BEV maker, has installed 193 swap stations and reportedly has plans to reach 500 by the end of the year. Nio also recently announced that it will test swapping in Norway. Renault, which experimented — spectacularly unsuccessfully — with a battery swapping  start-up more than a decade ago, has suggested it might try the concept again.

In the U.S., Ample has partnered with a company called Sally, which provides cars and light trucks for fleets of ride-hailing companies, last-mile delivery services, and taxis. The partnership plans to offer swapping stations in San Francisco,  New York, Chicago, and Los Angeles. Ample has also partnered with Uber. In the San Francisco’s Bay Area, Ample has installed six swap facilities units  to test its concept on Nissan Leafs equipped with Ample’s swappable battery pack . The cars are used by Uber drivers. Plans are to swap 1,000 car batteries a day within a year.

According to Ample, its battery swapping station, which looks like a slightly oversized automatic car wash, can be erected very quickly — for as little as a tenth of the price of an equivalent supercharging station.

Ample’s success may depend heavily on the willingness of automotive OEMs to incorporate the needed changes — albeit modest — to accommodate Ample’s drop-in battery. This would allow the OEM batteries to be quickly removed and replaced with fresh fully charged batteries. Ample says it has been talking with five automakers about adopting the Ample solution but has not named them.

There are additional challenges. The White House is proposing $7.5 billion for EV charging stations as part of the recent proposed infrastructure compromise. Earlier this year, Shell Oil itself had announced a plan for 500,000 U.S.charging stations, and several start-ups such as ChargePoint, EvGo and others have recently gone public.

Ample says that its advantage for fleets is that it dramatically reduces the cost and time to keep large numbers of vehicles fully charged, thanks to the potential throughput of its system. “You can cover a large metropolitan area with just seven or eight stations,” says John De Souza, Ample’s president and co-founder.

Not everyone sees a bright future for Ample. In a detailed article for the IEE Spectrum, author Lawrence Ulrich took the view that improvements in vehicle range– along with high-speed battery charging facilities–will rapidly outpace any advantages that swapping may present.

Our view? battery swapping is an interesting concept. But what appears to be a good idea is not always the solution that eventually wins out. Battery suppliers continue to work on reducing charging time. Range continues to improve. Moreover, even without government support, the number of public charging spots and stations are rapidly increasing Ample’s system could be especially interesting to fleets, but the scheme probably won’t be successful unless OEMs offer fleet vehicles that include compatibility with Ample’s swapping system, or just make all their BEVs compatible with Ample’s system. In a way, it’s a modern horseless carriage race.

Jul 6, 2021Janice
Fleet Logistics: Timing is Right for UK Fleets to Transition to EVsDriving in Severe Weather - What You Need to Know