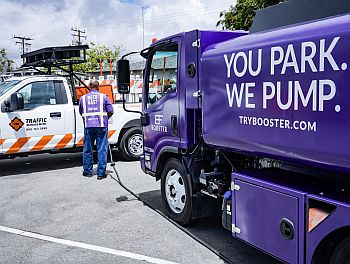 Booster announced it converted more than 90 of its diesel customers with close to 1200 vehicles to renewable fuels within the first month of its decarbonization initiative.

This move will help Booster’s customers cut emissions by more than 70 percent, saving more than 34 million pounds of carbon emissions next year.

“The lack of clean energy infrastructure poses one of the greatest barriers to decarbonizing the transportation sector,” said Frank Mycroft, CEO and co-founder of Booster. “Booster is offering a solution for customers who want to decarbonize affordably and sustainably but can’t justify driving miles out of their way to do so. By bringing renewable energy directly to fleets, we help optimize their operations while reducing emissions in communities.”

In a bold move for the environment, Booster notified its fleet customers last month of its plans to transition their vehicles from traditional fuels to renewable diesel before the end of the year. The change occurs following an announcement by Renewable Energy Group (one of North America’s largest producers of advanced biodiesel) and Booster to offer mobile delivery of renewable fuels to fleets.

Booster today services hundreds of fleet customers across the country, and will increasingly offer them delivery of renewable fuels which are now not commonly found at gas stations. Renewable fuels in general can be difficult to access: according to the U.S. government, less than three percent of fuel stations in the United States offer Ethanol (E85), and less than one percent offer biodiesel (B20 and above).

Booster believes that direct-to-vehicle renewable fuel delivery will appeal to many companies who want to achieve decarbonization goals without compromising their bottom line. In contrast to Booster’s offering, the energy transition from fossil fuels to alternative energies can require expensive overhauls, but major organizations have already committed: to date, 217 corporations have pledged to be carbon neutral by 2040, according to The Climate Pledge, which counts Amazon, Microsoft, Mercedes Benz, and Uber among its signatories.

Pinnacle Power Services, Inc., an electric distribution and telecommunications infrastructure construction company in Northern California, is an early adopter of Booster’s renewable fuels service for fleets, in part due to the appeal of sustainable delivery.

“Pinnacle secures reliable access to electricity for one of the largest utilities in the country, and our service providers must be able to carry out both routine and emergent work at all times,” said James Small, director of support services at Pinnacle. “Booster is the ideal partner to deliver on fleet readiness and cost efficiency, while also advancing our aggressive corporate commitments to sustainability.”

Dec 6, 2021connieshedron
How Modified Minivans Keep Those with Disabilities on the MoveA Call to Action: Focusing on the Sales & Marketing Funnel Vision