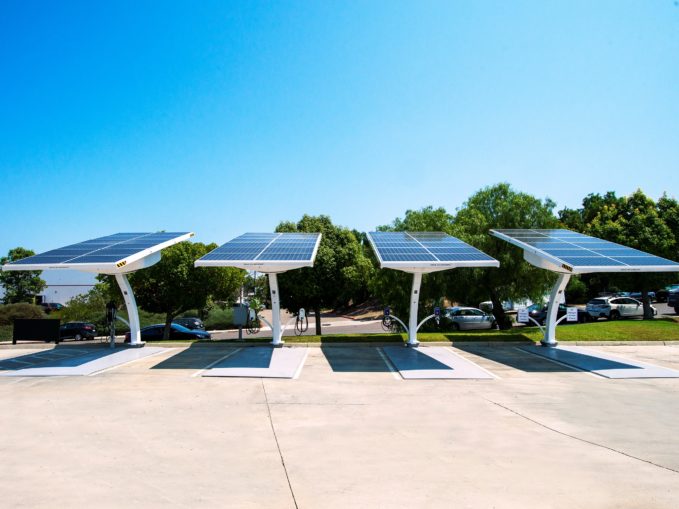 One of the biggest challenges North American fleets face when considering converting to electric vehicles is the relative lack of charging infrastructure. The solution, at least for depot-based fleets with routes that run under 100 miles a day or so, is to install their own.

But there are a couple of not-inconsiderable hurdles to that option. One is price: in many cases, connections to the local utility company require the digging of trenches at the fleet’s expense, which, alone, can run into the hundreds of thousands of dollars. Another is time: it can take many months and sometimes well more than a year to get a charging station up and running, given the availability of construction crews and that permits usually have to be obtained, by which time the fleet’s charging requirements may have changed.

Once installed, though, such new infrastructure is permanent, and if the depot’s location changes the charging infrastructure has to be rebuilt elsewhere at additional expense. And then there’s the fact that the electricity isn’t free and is subject to brown-outs and black-outs that occasionally strike utility companies.

The EV ARC 2020
Fortunately, there’s a company with a product that can remove every single one of those hurdles. It’s called Beam Global – recently rebranded from Envision Solar – and the product is a fully transportable, solar-powered charger that fits in a single parking space and can charge EVs and plug-in hybrids with no bills to pay, ever, for the electricity.

And lest you think that Beam’s EV ARC 2020, as the device is called, is some johnny-come-lately, unproven concept, you need to know that the company has been in business for 10 years and has installed its product in more than 100 cities in the U.S. and several foreign countries.

What’s more, it counts some big names among its customers, including Johnson & Johnson, Genentech, Pfizer, the Port Authority of New York and New Jersey and the cities of New York, Los Angeles, San Francisco, Oakland, and even the northern climes of Madison, Wisconsin. In fact, Wheatley says that the solar EV charging units work effectively anywhere in the U.S., as they can generate electricity even in the partial sunlight of cloudy days.

No utility bills, blackouts or brownouts
With a bit of the flare for the dramatic, Wheatley told the webinar audience, “If you are the kind of person that really relishes putting a bid package together and enjoys having three general contractors, a bunch of trenches and go through a permitting process, and you want to have an increased utility bill and uncertainty about whether or not you’re able to fuel your fleet vehicles during the next grid failure, I have nothing to offer you.”

The starting price for the latest model of Beam’s EV ARC solar EV charging units (as they’re called, generically) is a bit over $61,000. That price includes an integrated EV charger of the customer’s choice – the electrical corollary of a gas station dispensing pump – and Wheatley noted that his product can come with the customer’s choice from a number of EV charging brands on the market today.

An EV ARC looks like a stand-alone carport, with a roof that bears the solar panels, connected to a steel platform the size of a standard parking space, and fitted with a motor that keeps the solar panels optimally aimed for maximum exposure to sunlight throughout the day. The solar array is positioned high enough – 9 and a half feet over the platform – that there’s enough room for a car to park under it, so no parking space is lost. Each unit also features batteries that store generated electricity, which can be used not just for vehicles but, with the right connections, as power source for first responders or others in emergencies.

Can charge six at a time
But it’s not just the vehicle parked under the canopy that can be charged. An EV ARC 2020 can charge up to six vehicles at one time, and has cords that can reach up to 12 surrounding parking spaces. As company spokeswoman Sandra Peterson explained, EV ARC units generate enough electricity to power up to 245 e-miles a day.

“We concentrate on daily range replenishment, or DRR,” she said after the webinar. “Eight of 10 commuters require less than 24 miles for their round-trip commute; the average government fleet vehicle drives less than 25 miles per day, and the average U.S. sedan drives 30.4 miles per day. So, our EV ARC can supply multiple DRRs per day, regardless of the scenario.

But, she added, “Our experience shows that 95 percent of our units deployed across the U.S. generate and store more electricity than they are called upon to deliver. In the case of the other 5 percent, adding more units is the solution, which is easy because there is no planning, construction or grid upgrade requirement.” Once delivered by truck, installation takes only a few minutes, with a company record of just four.

As for reliability, Wheatley said the EV ARC 2020 is designed to last for 20 years, and its batteries come with a 10-year warranty. In addition, he said the units are rated to withstand 120-mile-an-hour winds and survive flooding of up to 9.5 feet. Peterson added that a unit at Beam headquarters in San Diego, California, has been in daily use “and after eight years still has no notable degradation in performance.”

Peterson said the company will soon unveil a solar EV charging solution for medium and heavy-duty vehicles dubbed “Solar Tree.” Fleets: stay tuned. Applications for the Green Fleet contest run by Tom Johnson of the 100 Best Fleets organization revealed that fleet adoption of solar EV charging is an emerging trend. Given what I’m seeing here about the EV ARC 2020, it’s not hard to understand why. For more information, visit Beam’s website.