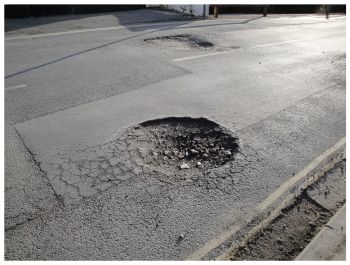 Roads are not cheap to maintain. But bad roads have financial ramifications, too — they’re just pushed onto another party.

Fred Smith, CEO of FedEx, sat down with members of the House Transportation and Infrastructure Committee to discuss the state of US roads. The portrait he painted was grim at best.

“Over the past 20 years, our over-the-road vehicles’ tire utilization has been cut in half. So we’re using almost 100 percent more tires to produce the same mileage of transportation,” Smith said. “Why is that? Because the road infrastructure has so many potholes in it it’s tearing up tires faster than what was the case before.”

FedEx knows what it’s talking about. Between its ground and freight operations, the logistics company drove more than 2 billion miles last year. Smith said that, in order to keep costs like this from increasing, he’s willing to swallow additional road usage fees and fuel taxes, which would go toward restoring roads.

Nobody likes discussing taxes, but ignoring the problems with our roads will end up costlier than any tax hike. Potholes can shred tire sidewalls to pieces and damage costly suspension components. The rougher the road, the more wear on the tires, and nobody wants to take their car into service more often than absolutely necessary.

It’s only going to get more troublesome when EVs become ubiquitous. Electric vehicles pay taxes through utility usage, but skipping out on gas taxes means roads will have to find money from somewhere else. It’s not going to be an easy conversation to have, but something needs to budge before we’re all forced to drive Land Cruisers over cratered surfaces more closely resembling the moon than blacktop.

Feb 8, 2017connieshedron
Jeff Schlesinger: The Man of the HourNTEA: A One-Stop Shop for Fleet Professionals