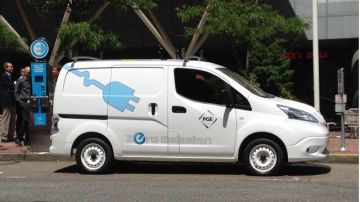 Denmark is about to gain the largest fleet of electric cars available for lease in Europe, thanks to a deal between Nissan and Avis.

The Nissans will be used for Avis’ leasing scheme, meaning they’ll be used for longer-term rentals rather than just ferrying travelers to and from airports and such.

The inclusion of the e-NV200 in this order indicates Avis may be interested in attracting more businesses as customers.

The e-NV200 launched in Europe and Japan last year, with the same electric powertrain as the Leaf.

It’s an electric version of the NV200 van currently sold in the U.S., and deployed as New York City’s “Taxi of Tomorrow.”

Like the gasoline NV200, the e-NV200 is available in both passenger wagon and cargo van configurations. Both are included in the Avis order.

Nissan has discussed selling the e-NV200 in the U.S., but has not set a timetable.

Avis will have among the largest lease fleets of electric cars in the world, dwarfing most existing schemes for leasing or renting plug-in vehicles.

In the U.S., the Leaf is available to rent through Hertz and Enterprise, while the Tesla Model S is available as part of Hertz’s high-end “Dream Cars” program.

There are also several carsharing services that use electric cars, including the Daimler-operated Car2Go, BMW-operated DriveNow, and the BlueIndy service in Indianapolis.

All represent a way to get more electric cars on the road and reduce carbon emissions, in the short term, at least.

To see the original story, go to Green Car Reports.