An Autonomous Car is Going Cross-Country for the First Time 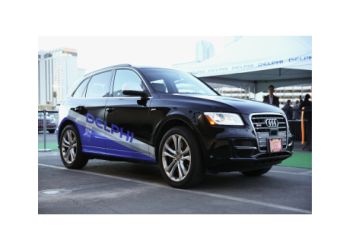 On March 22, an autonomous car will set out from the Golden Gate Bridge toward New York for a 3,500-mile drive that, if all goes according to plan, will push robo-cars much closer to reality.

Audi’s taken its self-driving car from Silicon Valley to Las Vegas, Google’s racked up more than 700,000 autonomous miles, and Volvo’s preparing to put regular people in its robot-controlled vehicles.

But this will be one of the most ambitious tests yet for a technology that promises to change just about everything, and it’s being done not by Google or Audi or Nissan, but by a company many people have never heard of: Delphi.

“It’s time to put our vehicle to the ultimate test by broadening the range of driving conditions,” says Delphi CTO Jeff Owens.

Delphi doesn’t build cars; it builds the stuff that goes into cars. It’s a key supplier to the auto industry, and has been for almost as long as there’s been an auto industry. It’s got a solid record of innovation, too. It built the first electric starter in 1911, the first in-dash car radio in 1936, and the first integrated radio-navi system in 1994.

Now it’s built a self-driving car, based on a 2014 Audi SQ5 (chosen simply because it’s cool. No, really.). The car looks like any other SQ5 (but for the stickers), but it’s packed with sensors and computers Delphi developed to replace humans: A camera in the windshield looks for lane lines, road signs, and traffic lights. Delphi installed a midrange radar, with a range of about 80 meters, on each corner. There’s another at the front and a sixth on the rear. That’s in addition to the long-range radars on the front and back, which look 180 meters ahead and behind.

Building your own autonomous car is a good way to develop the hardware (radar and LIDaR) and software (the algorithms that make driving decisions) automakers will need. “What we expect to do is be able to create better sensors and more sensors, and then the software algorithms as well, which the [automakers] will need as they take more steps along that journey to automated driving,” says Owens.

So why the road trip? It’s about collecting data. Delphi says it’s covered hundreds of miles in the past year or so around Silicon Valley and Las Vegas, both on the highway and on city streets. Going from California to New York provides terabytes of information on how the sensor suite detects the world around it, and how the car drives. With that data, it can continue to improve its technology, tweaking software and hardware alike to make the car’s driving more reliable.

To see the original article go to wired.com.

Mar 16, 2015connieshedron
LeasePlan to Share Expertise at Conference of Automotive RemarketingSay the Word: Voice Systems can Reduce Some Types of Distraction