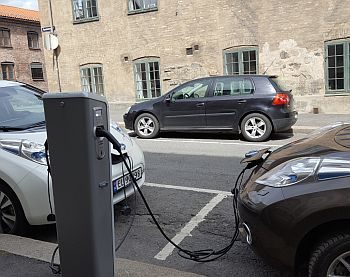 There have been some voices raised lately that say it’s already cheaper for people to swap out their fossil-fuel vehicles for 100 percent electric vehicles, also known as Battery Electric Vehicles or BEVs.

A couple of those voices could be heard just last week. Fleet Management Weekly curated an article from NGTNews.com about a brand-new U.S. Department of Energy (DOE) study that said consumers can save as much as $14,500 on fuel costs by driving an electric vehicle for – and here the emphasis is mine – 15 years.

Now don’t get me wrong — that’s a nice chunk of change, but it’s less than $1,000 a year, which is still nice. But how relevant is that to fleets that typically hold a vehicle for only three or four years, especially when BEVs cost more than gasoline and diesel-fueled vehicles and federal incentives on some OEMs are running out?

Another voice came in a NAFA Fleet Management Association webinar last week entitled, “Are Electric Vehicles Realistic for Fleets Now?” The answer is “yes, in many cases, “according to the presentation leader, Yann Kulp.

Kulp is a long-term energy industry veteran who is now vice president and a co-founder of eIQ Mobility, a two-year-old California company that has been advising fleets on whether and how to switch to EVs. Kulp supported his answer with data his company has compiled from fleet studies covering some 22,000 light- and medium-duty vehicles that address the two biggest areas of fleet concern about EVs: their range and total cost of ownership.

Kulp said eIQ Mobility found that, across the entire U.S., BEVs are “technically feasible” for 59 percent of all the fleet vehicles studied (but 91 percent when it comes to sedans), meaning that BEVs’ range on a single full charge meets or exceeds fleet drivers’ daily business requirements. The company has also found, he said, that 38 percent of the 22,000 vehicles studies are “economically feasible” in that their total cost of ownership (TCO) is equal to or less than that of the vehicles they would replace.

To support the claim, Kulp showed a slide displaying a bar graph that compared the average TCO of a vehicle powered by an internal combustion engine (ICE for short) with that of a BEV in three vehicle categories: a sedan, a SUV and a pickup truck. In each case, the savings for the electric vehicle was significant: slightly more than $12,000 for the sedan, $15,300 for an SUV and $25,800 for the truck. The vehicles in the sedan category that eiq looked at were the Tesla Model 3, the Chevrolet Bolt, and the Nissan Leaf, all with an MSRP under $40,000.

Those numbers don’t support each vehicle category equally, though. The case is strongest for passenger cars, of which 82 percent are economically feasible to be replaced by BEVs, Kulp said. But among medium-duty vehicles, just 5 percent pass the TCO test.

But the fly in the ointment in this analysis, for me and, presumably, a fleet manager deciding on this year’s acquisitions is – like the DOT study above – the consulting company’s time frame: the presumed holding period for the comparison shown on the slide is 10 years.

On the plus side, eIQ Mobility’s study goes farther than the DOE study cited above, which only looked at how much cheaper it is to power a car with electricity instead of gasoline or diesel fuel (plug-in hybrids were not studied). In addition to the long-term cost of fuel, eIQ’s TCO calculations also include vehicle acquisition cost, maintenance expenses, the cost of acquiring charging stations, government and utility incentives and vehicle resale value.

But when I asked Kulp after the webinar whether the TCO advantage for BEVs holds over a typical fleet vehicle holding period, he merely confirmed that when offering advice, “we calculate several durations for our clients, both their current durations, say three years, and longer, so they can compare the impact on TCO. We compare the TCO of their current ICE vehicles with their potential BEV vehicles, so they can make apples-to-apples decisions.”

That means that while the aggregate numbers regarding BEVs’ cost advantage may be attractive; it really comes down to the particular use case or cases for each fleet. Certainly, one factor to consider is the holding period, but there are others, too: the availability of incentives the cost of electricity in the state a fleet operates in, and the climate. (Kulp pointed out that those factors weigh heavily, for example, against Hawaii and Alaska).

Another wild card has to be projected resale value. What happens to the value of a BEV acquired today when, as Kulp said, in four years the acquisition cost of the average BEV will be competitive with ICEs?

Finally, there’s the cost of installing charging infrastructure and how fast you want to recharge your vehicle. eIQ Mobility’s technical feasibility analysis includes the use of slow home-based chargers, which can cost as little as $300 for a Level 1 device that takes eight to 12 hours to deliver a full charge, while a Level 2 charger that takes just two to three hours for a full charge, costs $1,000 to $2,000.

But a commercial-grade charging system capable of supporting a number of vehicles at the same time – the kind that government fleets, for example, need – can cost hundreds of thousands of dollars. The U.S. Postal Service found that out last year, in a pilot program to switch to fifteen BEVs for parcel delivery at three locations in California. Two already had sufficient electric service from their local utility, but the third didn’t. The bill for that one alone, with 10 charging stations, was more than $75,000. Happily, most of the cost was covered by state and federal grant money.

For some fleets, like those whose parent organization has made the reduction of their greenhouse gas emissions a top priority, a lower TCO may take a back seat to a near-term decision to move into BEVs. But for those where it remains a top priority, it’s going to take some very thorough and precise analysis to make the switch – at least for now.

Jul 26, 2020Janice
We Believe the Work You're Doing Each Day MattersIntel’s Mobileye And Ford Sign Deal On Next-Generation Driving Technology