Automakers Revisit Tactics That Hurt Them Before Recession 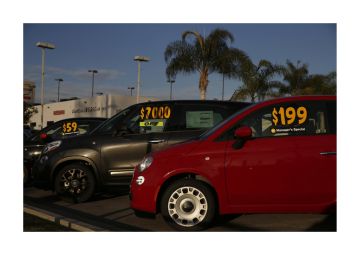 When the car industry collapsed in the recession, automakers pulled back sharply on aggressive leasing deals and other financial incentives that had artificially increased their sales for years.

But now, with carmakers under pressure to maintain last year’s record numbers, they are once again turning to the same tactics that got them into trouble a decade ago.

Automakers are offering increasing discounts on economy cars and luxury models alike, relying more on sales to fleets like rental-car companies and bloating dealers’ inventories. More and more auto loans are being stretched out over longer periods of time.

At the same time, automakers have cranked up leasing to record levels. In March, leasing accounted for 31.3 percent of all new-car transactions, a record that exceeds the prerecession levels, according to Edmunds.com, an auto research website.

But there could be a harsh payback in the future. Automakers that rely heavily on leases end up taking the vehicles back in three or four years and selling them as used — often at big discounts.

“I’ve seen this movie before; it’s not a pretty ending,” said Mike Jackson, chief executive of AutoNation, a chain of 373 new-car franchises. In the mid-2000s, he railed against similar excesses that overheated the auto market, and he’s fretting again.

“Manufacturer incentives are at a dangerous level,” Mr. Jackson said. Pumping up sales through profit-eating incentives and high fleet sales, he added, “is nitroglycerin.”

At the top of Mr. Jackson’s concerns is leasing, which is a way of renting a new car for a specified period of time, like 24 or 36 months. Customers like leases because they typically make lower monthly payments than if they bought cars with loans. Automakers and dealers like leases because they get more flexibility to structure deals that enable customers to get pricier cars with affordable payments.

Consider the lease secured by Allen Lin, a teacher from Altadena, Calif.

A few weeks ago, he walked into a Lexus dealership and drove out about two hours later with a 2016 RX 350, leased for three years at $408 a month. The small sport utility vehicle — one of the most popular on the market — had recently been fully overhauled, and redesigned car models typically sell with little or no discounts. But Mr. Lin paid no money up front, did not trade in his old car and got $5,000 knocked off the car’s list price of $43,779.

Brian Smith, vice president for marketing at Lexus, said that leasing helped keep customers from straying to other brands but that Lexus did not use it to drive sales volume.

Luxury makers tend to lean on leasing more heavily than more middle-of-the-market brands. For example, more than half of all Lexus, BMW, Mercedes-Benz, Audi and Acura cars are leased. Still, all automakers use leasing to some extent, and all shapes and sizes can be leased.

The three most-leased vehicles are the Honda Civic, the Honda Accord and the Toyota Camry, according to Experian Automotive.